Posted on August 28, 2012 by Brett David Roberts in College Football,Headlines 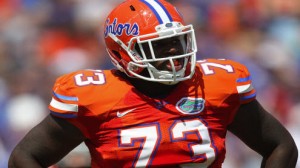 Will Muschamp announced last week that the team would use a two quarterback system rather than settling on one of the two choices, Jeff Driskel and Jacoby Brissett. Both are sophomores and are mobile quarterbacks with strong arms. Brissett seems to react to defenses a little better when primary options evaporate, but Driskel is slightly better afoot. Muschamp is going to alternate quarters for the two in the season opener in an attempt to see if either one can claim the full time duties.

Brent Pease is the new offensive coordinator and has brought in a multiple formation offense that he used in his coaching days with Boise State. He thinks that the approach is best for exposing potential weaknesses in various defenses. Still, the offense’s success will largely hinge upon the improvement of their ground game, as last year they ranked 8th in rushing yards with 143.0 per game. Mike Gillislee will have every opportunity to run the ball behind a good and experienced OL. Because of this strong line, Pease feels that the team can better run the football and establish a more versatile offense this year.

Florida will also count heavily upon their receivers with the varied attack, and they are hoping junior WR Andre Debose lives up to the expectations that existed when he first arrived in the program. Latroy Pittman, a true freshman, looked good in spring, but is still an unproven threat of course. Quinton Dunbar, a sophomore, is expected to start along side Debose.

Florida’s DL should be exceptional this year. It hurt losing Ronald Powell in spring to a torn ACL, but he could be back by late October. Sharrif Floyd at tackle, Omar Hunter at nose, and Dominique Easley, will all keep the line in top form. The LBs, including Jelani Jenkins and Jon Bostic, should be in for a big year, as well. True freshman Antonio Morrison may be a huge impact player, as well, as he was the defensive standout of the spring game and could make an immediate impact for the Gators.

It all adds up to spell a dangerous defense for the orange and blue. Their secondary is also among the best in the SEC. CB Marcus Roberson was exceptional before sustaining a season ending neck injury against South Carolina. Loucheiz Purifoy will now start at CB after being a reserve and special teamer in his freshman season. Matt Elam is a good safety and Josh Evans and De’Ante Saunders will see time at safety as well, with Evans expected to start at free safety.

The Gators defense was pretty solid last season, ranking 5th in the SEC in total yards allowed, with 299.5 yards surrendered per game. Their passing defense was exceptional, ranking 3rd in the SEC, allowing just 166.9 yards per game. It also ranked 7th nationally.

Florida’s best special teams action was at kickoff returns and field goals last season. Debose is a top tier return man in the nation and placekicker Caleb Sturgis will return with his strong field goal kicking. Both will keep the special teams of the Gators very good, but punter Kyle Christy must become a more reliable source of long punts.

Muschamp knows Gators fans are impatient, but improvement should come this season. Athlon magazine predicts a modest improvement for the Gators, with a projected 8-4 record and a winning 5-3 record in the SEC. The season will end with a real bang as the Gators travel to their biggest rival Florida State on November 24th. The LSU game is on the 6th of October, and will serve a a great measuring stick for Muschamp to see how his team stacks up against a BCS contender and conference rival.