The Cardinals have taken over sole possession of first place in the NL Central division, as they welcome the two-time defending NL Champs. 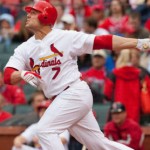 Philadelphia has lost seven of nine games on the road and just dropped three of four to the Chicago Cubs at Wrigley Field.  “We haven’t hit for a long time,” manager Charlie Manuel said.  “We hit spurts where we come out of it.”  The team stands at 21-25 away from Citizens Bank Park and have dropped three consecutive series on the road.  The Phillies have compiled a 4-3 record in their last seven games, but are averaging 4.3 runs in that span while hitting for a combined .218 average.  Philadelphia is 18-11 against NL Central teams this season, after going 23-16 versus the division in 2009.  After allowing 10 or more runs, the Phillies are 1-3 this season (-300) and 12-9 over the last three years (-100).

St. Louis moved into first place in the National League Central on Sunday, after finishing off a four-game sweep of the Los Angeles Dodgers in walk-off fashion.  Manager Tony LaRussa isn’t going to allow his team to get too excited in saying, “All we have done is win the first series.  There is another tough series coming up and a lot of baseball yet to play.”  The Cardinals are now focused to win six straight games for the first time in two seasons and move 11 games above .500 for the first time since finishing with a division-best 91-71 record last season.  St. Louis allowed numerous starters to rest on Sunday afternoon, including All-Star first baseman Albert Pujols, which may pay big dividends in the series opener.  The club is a dominating 9-1 on Mondays this season (+800) with the total being 5-5 O/U in those games.

Cardinals starting pitcher Blake Hawksworth is 3-5 with at 4.72 ERA in 26 appearances (five starts) this season (-130) and will be making his first start at Busch Stadium since July 1.  He picked up a 4-2 road victory over the Astros in his last outing, giving up two runs and seven hits over 5.1 innings of work.  The right-hander will be making just his second road start of the year (12 appearances), going 1-3 with a 4.50 ERA.  Hawksworth is enjoying a solid month, tallying an even 1-1 mark and 3.86 ERA, but hitters are combining to hit .313 against him.  In three career games against the Phillies, he is 0-1 with a 7.71 ERA.

Bettors must respect Kendrick’s perfect numbers against the Cardinals coupled with the Phillies 23-13 mark when the total is 9 to 9.5 this season (+540).  St. Louis has been a losing venture in the same situation, posting a 7-9 record when the total is in that range (-340) and the total is 3-11 O/U.