The Braves lead in the NL East is now just 2.5 games as they host the struggling Mets at Turner Field. 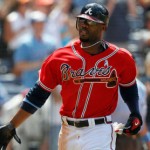 New York has dropped 15 of its last 21 games, including a 14-1 blowout loss to the last-place Arizona Diamondbacks on Sunday.  “It definitely hurts your pride a little bit when you perform in that manner,” manager Jerry Manuel said.  “We didn’t pitch, we didn’t hit, we didn’t play defense.”  The Mets now head to a field where they’ve dropped 15 of their last 20 meetings.  The team has taken five of the first eight meetings between the two clubs, but they’ve yet to win a season series over the Braves since the 2006 season.  Offensively, the club is hitting just .210 with 54 runs scored and 15 home runs in 17 games since the All-Star break.  New York is 19-20 against divisional opponents this season (-350) and the total is 16-22 O/U in those contests.  The Mets will try to avoid dropping to the .500 mark for the first time since June 2, when the team stood at 27-27.

Mets starting pitcher Johan Santana is 8-5 with a 3.11 ERA in 22 starts this season, but is coming off one of his worst outings of the year.  In his last appearance, he allowed seven runs and 13 hits in 5.2 innings, while managing to strike out just two batters.  The left-hander is an even 2-2 with a 2.77 ERA in 11 road starts, as opponents are hitting for a combined .234 against him away from Citi Field.  Santana made six starts in July, posting a perfect 3-0 mark and 2.06 ERA.  In 10 career starts against the Braves, he has a disappointing 2-5 record, but has compiled a solid 2.77 ERA.  He tossed seven shutout innings in a 3-0 home victory over Atlanta four starts back, scattering five hits and striking out five.

Atlanta finished its nine-game road trip with a 3-6 record, dropping Sunday’s contest 2-1 at Cincinnati.  The Braves still lead the division by 2.5 games, but they began the road trip with a seven-game lead.  “We need to pick it up and start hitting a bit,” said manager Bobby Cox.  The lineup has produced a combined batting average of .236 over the last seven games, but the team is still hitting .260 for the season.  Atlanta is an even 19-19 against divisional opponents (-420) and the total is 12-23 O/U in those games.  The Braves are also an even 17-17 versus southpaw starts and Cox will certainly find room for Matt Diaz in the lineup tonight.  He is a lifetime .538 hitter (14-for-26) against Santana.