Posted on April 21, 2015 by Brett David Roberts in Headlines,NBA 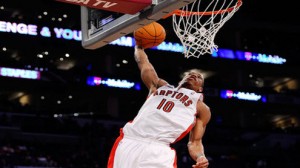 The Washington Wizards and Toronto Raptors treated fans to the best game thus far of the 2015 postseason. The Wizards sacrificed a 15-point lead Game 2 but won in Overtime. This one is expected to go better for the Raptors with NBA oddsmakers setting the daily live NBA lines 5-points in favor of Toronto at oddsmaker Bovada. The total is set at 192, which is further explained in our NBA odds section.

In the preview, the bold claim was made that the Raptors would sweep the series and that clearly is not the case. However, Toronto still should be able to prevail in this one by getting back on track tonight. The Raptors outscored the Wizards 26-17 in the fourth quarter but fell victim to the experience and poise of Paul Pierce. Pierce already made bold comments saying he doesn’t believe the Raptors have what it takes to defeat Washington. Coach Randy Wittman said of Pierce that “he was really big..I thought the three he hit to start the overtime was big for (our) momentum.”

The Wizards now also have momentum in the series. The backcourt of Bradley Beal and John Wall accounted for 26 points and the Wizards gave Pierce 37 minutes, in which he scored 20 on an efficient 7 of 10 shooting night, four of those field goals having been threes. Marcin Gortat will need to get more involved, as he can be a great option in pick and roll and pick and pops with John Wall. Wall struggled, hitting just 5 of 18 from the floor. But he played well in creating eight assists while turning the ball over just once.

The Wizards committed only 10 turnovers, four of which came from Beal. Beal hit just 6 of 23 from the field and 1 of 7 from three and the Wizards still won. That actually bodes really well because Beal is deadeye shooter and had the Wiz shot better than 6 of 21 from three, it could have won this game with relative ease.

But Toronto is not going to just sink in this series. The starting backcourt shot horribly in game one, hitting just 8 of 30 between Kyle Lowry and DeMar DeRozan, while swingman Terrence Ross was also an ice cold 3 of 11. The Raptors will need to start to work the ball inside to Jonas Valanciunas more, who had the best plus/minus of all Raptors starters at negative-1. DeRozan did a good job of helping Jonas V. on the boards, but the Wizards still held a plus-4 advantage on the glass. Washington had no fear of Valanciunas’ shot blocking and scored 52 points in the paint.

The Raptors also shot only 38 percent from the floor, opting to shoot 29 threes, of which only six fell. While Toronto’s offense looked good and fluid, the shots weren’t falling no matter how well Lowry set the table. It’s hard to imagine that being the case after a couple days rest and renewed focus, but if Washington leaped out to a 2-0 lead after beginning the series on the road, the Raptors would be pushed into a corner. Toronto was 22-19 on the road while the Wizards are a tough team at home where they went 29-12 this season.