Posted on September 6, 2013 by Brett David Roberts in College Football,Headlines 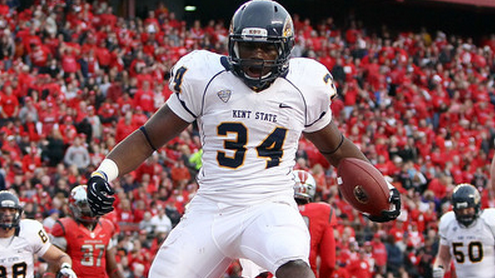 Bowling Green defeated Tulsa 34-7 last week at home. The defense prayed on several miscues by the Tulsa Golden Hurricanes. Two fumbles were forced and Ryan Burbrink returned a punt for 67 yards to in the fourth to put the BG Falcons up 34-0. The Falcons balanced their offense, while Matt Johnson completed 11-of-23 for 151 yards with one interception. The Falcons gave up just 51 rushing yards.

Bowling Green finished 8-5 last season and is a threat in their MAC conference, and they don’t face any major opponents all season.

Kent State will be one of their biggest in conference threats, and this game has major implications. Kent State finished 11-3 last season and won the MAC East, but they lost their quarterback.

The team lost Spencer Keith and started this year off with Colin Reardon. Reardon started week one off with outstanding results: 194 yards, 21-of-28 passing (75 pct), two touchdowns and a 156.8 QB rating. Reardon is a redshirted freshman and if Dri Archer is ready to rush big time again this year, the Golden Flashes could be a dangerous team. Archer and Traylon Durham combined for almost 2800 yards last year, and Kent State is good at keeping control of the clock.

Kent State will face some challenges this year in LSU and Penn State, but the program is continuing to make strides. An upset is not out of the question as Bowling Green’s defense seems to be the more suspect of the two in a game which already features a precariously low total.

Check out Maddux’s paid pick plans for the 2013 College football season as we line our bettors’ pockets once again!