Posted on August 30, 2013 by Brett David Roberts in College Football,Headlines 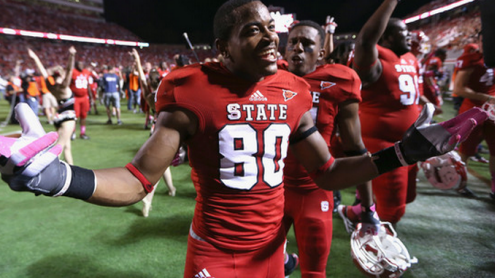 Louisiana Tech finished 9-3 last season and will be guided by first year coach Skip Holtz (career record 54-48). Sonny Dykes left for Cal, but Holtz said he plans to keep the “Air Raid” attack of Dykes while implementing a few changes of his own. Scotty Young will be his QB, after sitting out his transfer season and coming from Texas Tech. Young is one of five QBs on the roster, though, so the controversy of who will be airing it out is up in the air, too. The Bulldogs led the nation in total offense last season (577 yards per game), so whichever of the five it is, will inherit a high powered machine.

Runningback Kenneth Dixon was the WAC Freshman of the year and ran for 1,184 yards. WR Hunter Lee caught 398 yards on 31 receptions and is the top receiver this year.

The defense of La Tech ranks worlds behind the offense, though, unfortunately. And that won’t help at all against NC State this week, as the Wolfpack have a very strong offense, as they showed by hanging tight with a number of ranked opponents last year, as well as defeating FSU. The defense last season gave up 526 yards a game and only four starters return. That may be looked at as a good thing since last year’s weren’t very good, anyway…

NC State went 7-6 last season, but scoring the huge victory Florida State was undoubtedly the best part. It came one week after nearly knocking off the Miami Hurricanes, and then the following week on Oct 20 the Wolfpack defeated Maryland. The team would lose three of its final five games, but score a bowl appearance in the Franklin American Mortgage Music City Bowl, where Vandy hosted and won 38-24. The team has a new coach in Dave Doeren after Tom O’Brien was released.

Doeren brings success. He has a career record of 23-4, but he has a lot of decisions to make with his team early on. He will be using both his quarterbacks in this game, Brandon Mitchell and Colorado State transfer Pete Thomas. Thomas started 21 games for Colorado State and threw for 4,269 yards, 18 TDs and 22 INTs.

“You just have a lot of different things which makes for a lot of unknowns…so you have to split your time and take (the) film…it just makes it hard defensively because you cannot put all your time into putting together one game plan,” Louisiana Tech coach Skip Holtz said.

Whether it is Mitchell or Thomas taking the snaps, expect the Wolfpack to run a lot. Shadrach Thomas and Tony Creecy both ran for a combined 1,100-plus yards, and the team will rely on them to control the clock should they sneak leads against ranked opponents. Quintin Payton and Bryan Underwood are both good, experienced receivers, too, so the team can definitely vary the attack.

The Wolfpack offense and lack of Bulldogs defense accounts for the 63.5 point total set by college football oddsmakers at 5dimes, and the Wolfpack have to be the double-digit favorites given their success last season. NC State has a lot to play for this year and should be amped to begin their season on a good note. Expect Dave Doeren to encourage his team to run the score up after it gets out of hand to make a statement to the rest of the ACC.