Posted on October 5, 2013 by Brett David Roberts in College Football,Headlines 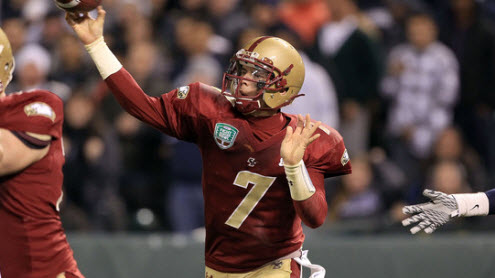 Army has been rushing their way to success. The Black Knights uni-dimensional attack found success last week with a 35-16 victory over Louisiana Tech. Army ranks 2nd in the nation in rushing yardage with 325.4 per game and had 414 of their 430 yards via the rush. Angel Santiago attempted just three passes but rushed 19 times for 77 yards. Terry Baggett led the way with 143 yards on 18 carries with two TDs. On the season, six Knights have rushed for at least 120 yards with Baggett and Santiago accounting for nearly half the yardage.

What hurts Army in addition to not having a pass game is a middling defense which holds opponents to 25.4 points per game. Boston College has the offensive talent to open up and score on this Army team, though the Eagles have struggled this season thus far. BC has dropped consecutive weeks after facing USC and then-No. 8 FSU. The Eagles opened the season with wins over Villanova and Wake Forest.

Senior QB Chase Rettig has improved his accuracy and is hitting 61.9 percent for completion this year. He’s also improved his QB rating to 142.5, and the 6’3″ 206 pounder has thrown 8 TD passes to his 3 INTs. The Eagles rush has had middling effectiveness with Andre Williams having carried 2/3rds the load. Williams has 505 yards on 103 carries and two TDs, but has little help in the backfield.