Posted on September 20, 2013 by Brett David Roberts in College Football,Headlines 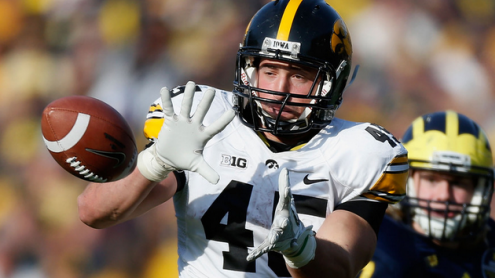 Iowa has rebounded with consecutive wins following their opening week loss to Northern Illinois. In week 2, against Missouri State, the Hawkeyes won 28-14; then it followed that up with a 27-21 victory over Iowa State last week. This week is not expected to prove challenging, facing a Western Michigan squad that is a 16-point underdog.

The Hawkeyes do most of their damage with the run, averaging 239.3 yards per game to just 203 in the air. The reason behind that is both because QB Jake Rudock rushes himself (63 yards on the season) and because lead back Mark Weisman has been carrying the team to the tune of 425 yards in three weeks. Weisman, a 6’1″ junior, had 180 yards against Missouri State, including two TDs.

The running back is already over half-way to eclipsing last season’s 815 yards, just sheerly due to high usage. The Hawkeyes will look to get Weisman going before opening it up in the air under the arm of Rudock and his 61 percent completion ratio. The team is dual-threat, but just has not had to prove it yet, due to their opponents’ inability to contain Weisman.

It’s hard not to think of Western Michigan as a pushover. The squad lost to lowly Nicholls State in Week 2, and naturally didn’t fare any better against powerhouses Michigan State and No. 17 Northwestern. Western has been outscored by a margin of 91-53 in the first three weeks, and it probably won’t be much better in this matchup.

The Broncos have struggled to drive the ball, and don’t offer much of a threat via the pass or the run.

QB Tyler Van Tubbergen has completed just 44 percent of his passes, and the run has had only middling effectiveness. Brian Fields and Dareyon Chance have rushed for 368 yards, but it has taken them 81 combined carries. Neither has much big play potential, which leaves this Western team without many recourses towards putting points up. Moreover, Van Tubbergen has thrown five picks on the season, which only further hinders Western’s chances of even covering the 16 point spread set by college football oddsmakers at 5dimes.

Check out our winning picks this season here at Maddux Sports!