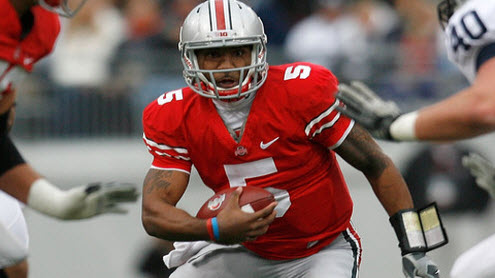 Ohio State was sanctioned last year from playing in the Big Ten championship game as well as bowl play, but they’re eligible this year and off to the kind of start that was expected. Last week, however, Braxton Miller went down on the first drive of the game. He was replaced by Kenny Guiton, who led the Buckeyes to a 42-7 victory. Urban Meyer said he is “fairly optimistic” that Miller will play this week, but if he doesn’t, the line for this game could be very off.

Miller is the workhorse of the Buckeye offense, but he is slight of frame and absorbs a lot of big hits. Can the Buckeyes protect him enough to get a full season out of him? He’s tough and comes back from injury well, but it is imperative that the Buckeye offensive line provides Miller adequate protection.

Cal opened the season with a tough loss to No. 22 Northwestern. Cal was outscored 17-6 in the final period after entering the fourth quarter down just a field goal. A positive that can be drawn from the loss, though, is that the Golden Bears had more yardage than Northwestern, 549-508.

Jared Goff threw for 450 yards but had three interceptions, and Brendan Bigelow averaged just 4.1 yards on his 15 carries. It will take a perfect storm of Goff being more accurate and Bigelow breaking some tackles for more yardage to keep Cal in this game against OSU.

Cal did defeat Portland State last week, 37-30. Goff shined against the inferior opponent, and Cal amassed 616 total yards. The questions about defense will persist, though, as they gave up 553 yards and 245 rushing yards.