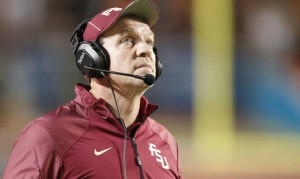 The Florida State Seminoles were absolutely obliterated in Week 3 by Lamar Jackson and the Louisville Cardinals.

The Seminoles fell precipitously from its No. 2 national ranking to No. 13 in losing 63-20 to Louisville, as Jackson just had a field day against the Seminoles’ defense. He threw for 216 yards on 20 passes while rushing for another 146 yards and four TDs, as the Cardinals rushed out to a 35-10 lead at the half before coasting the rest of the way.

Brandon Radcliff also had 118 yards on 14 carries and a TD, and Jeremy Smith had a pair of rushing TDs as well. James Quick had seven catches for 122 yards and Jaylen Smith caught the lone receiving TD with 35 yards on his pair of catches. The Cardinals utterly demolished the Florida State defense, and it was not all just Jackson. Can FSU get it back on track when it travels to face the South Florida Bulls in Week 4?

It will take better play from quarterback Deondre Francois. He threw 7 of 18 last week for just 101 yards and had an interception with a quarterback rating of just 16.2. Francois was even less successful on the ground, going for -34 yards on 12 carries.

The Seminoles got production from Jacques Patrick, who rushed seven times for 79 yards, but the team averaged just 4.0 yards per carry on its 43 attempts and that is not going to be anywhere near enough with the way Francois was struggling in the pocket. The Seminoles basically need a complete 180 degree turnaround this week against a tough Bulls team on the road.

South Florida is 3-0 after knocking off Towson, Northern Illinois and Syracuse in Weeks 1 through 3. Last week was a 45-20 win over the Orange which saw Quinton Flowers throw 12 of 24 for 188 yards and a TD, while rushing for 51 more yards on 11 carries.

Running back Marlon Mack had 115 yards on just nine carries with two TDs and a 52-yard run, and the Bulls had 220 passing yards and 234 on the ground. Rodney Adams rushed four times for 34 yards but led South Florida in receiving with 67 yards on four catches and the lone receiving TD. The Bulls had five receivers with 30 or more yards in the game.

Flowers is now in his junior season and he threw for 2,296 yards last season while connecting on 59.1 percent of his passes. He had 22 TD passes and eight interceptions, but he was sacked 20 times on the season and had a raw QBR of 56.3. This season may be better. He has upped his per-completion average to 9.55 yards with seven TDs and just one pick on the season. If he maintains the improvement in accuracy, Flowers could help the Bulls to an AAC title.

Mack is also a junior and he has rushed for over 1,000 yards in the past two seasons, including last season’s 1,381 yards and eight TDs. Mack already has three TDs on just 18 carries this season, so when the Bulls really up his payload the production may pour out. He is averaging 9.6 yards per attempt this season.