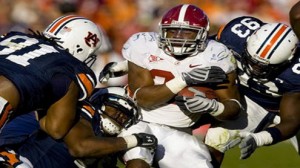 One of the great things about college football betting is that we can never really know how good teams are, and how strong their conferences are, until the season starts. The turnover of players every year means that young players always play key roles, and we can’t know how they will handle them until they are tested in the heat of battle. Until the first couple of games are history everything we think about the sport is pure speculation. Luckily, speculation is a whole lot of fun. As we sit well under two months form the start of the season here’s how I rank the six major conferences based on their perceived strength:

1. SEC – I’ll be totally honest up front – I hate the SEC. It’s a painfully arrogant conference that gets far too much hype. If I hear one more word about their speed I’ll throw up. That being said, I can’t deny that they come into the season as the strongest conference. They have won the last four national championships, and Alabama has as good a chance as any team of winning it this year and repeating as champs. Alabama has to replace most of their defense, but the offense should be very good. Florida will be dangerous yet again if John Brantley can fill in capably for Tim Tebow – and there is no reason to think he can’t. Auburn could have a great year if Cameron Newton lives up to the hype. Arkansas could also surprise if Ryan Mallett is healthy. Georgia, LSU, and South Carolina could threaten as well. This is a deep conference.

2. Big Ten – I love the Big Ten even more than I hate the SEC. Ohio State is ready to be a major factor in the national picture as long as Terrelle Pryor continues to take steps forward. Wisconsin has a chance to be special as well anchored by a surprisingly good offense. The Badgers host the Buckeyes in a game that could be the de facto conference championship. Iowa has national potential if everything falls their way as well, and Penn State can cause more than their share of headaches. That’s four very solid teams. I’m also holding out hope that some kind of miracle happens and my beloved Wolverines can look like an actual football team for the first time in far too long – though I am braced to be disappointed on that front.

3. Big 12 – This league goes through a major overhaul this year with the departure of major stars like Colt McCoy, Sam Bradford, Ndamukong Suh, and lesser lights like Dez Bryant and Zac Robinson of Oklahoma State. If the replacements step up, though, then this league can still make some noise. At the top of the heap is Texas. Garrett Gilbert is a very capable QB who got a head start on his career in the national championship game last year. He will be leading his team into a schedule that is laughably soft out of the conference, and can certainly be handled in the conference. If Gilbert plays well he could potentially reach his second national championship game despite only starting one season. Oklahoma is going to face a rougher road this year, but is still going to be dangerous. Nebraska keeps getting better, and will be looking to say goodbye to the Big 12 in grand style. Texas A&M could be a pleasant surprise as well, and I am excited to see what Turner Gill can do at Kansas.

4. Pac-10 – I wasn’t that optimistic about this conference in the first place, but two bouts of bad luck for teams has made things even worse – USC is not bowl eligible thanks to NCAA sanctions, and Oregon has lost Heisman caliber QB Jeremiah Masoli after he got caught bending the law. Still, USC has lots of talent and is always dangerous, and Oregon has QB Nate Costa ready to take over from Masoli, so they should both be huge factors. Andrew Luck is one of the players I am most excited to see in his second year at Stanford, and the Cardinal could be conference contenders under his leadership. Oregon State should be good as well – particularly on offense.

5. ACC – There are some interesting teams in the ACC, but all face real challenges before they can prove themselves in my eyes. Virginia Tech is probably the best of the lot, but they open the season against Boise State, and I’m not at all sure that they can win that. Georgia Tech is pesky, but lost their best players to the draft. Miami is a team I really like – especially QB Jacory Harris – but they have a tough schedule to overcome. Florida State is going through a coaching change and I really doubt their defense. Clemson is short of explosiveness and never seems to meet expectations. The ACC could be better than I think it is, but I doubt it.

6. Big East – This is just not a good conference. Five or six teams could win the conference, but none of them will scare the team they meet up with in the lesser BCS bowl they end up in. Pittsburgh is probably the best thanks to Dion Lewis, but they still have far more holes than a team should after so long under one good coach. Cincinnati loses their offense centerpieces and their brilliant coach. West Virginia has absolutely horrible coaching. Rutgers lacks depth. UConn does to. I’m not impressed.