Posted on November 1, 2013 by Brett David Roberts in College Football,Headlines 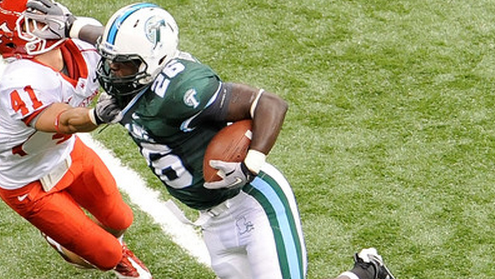 As bad as the 2-6 Florida Atlantic Owls have been this season, the team will find itself 2.5 point favorites according to college football oddsmakers at 5dimes, as it hosts the 6-2 Tulane Green Wave. Tulane is riding a four-game win streak, but all four games were at home against the likes of North Texas, East Carolina, LA- Monroe, and Tulsa.

Tulane has had reasonable offensive success against its schedule this season, averaging 27.4 points per game and posting 316.4 yards per game. The defense has been passable, too, allowing 23.8 points per game. So, why does a 6-2 Tulane team find itself an underdog to Florida Atlantic?

The Owls were blown out last week at Auburn, predictably losing 45-10 to the SEC powerhouse. The week prior to last the Owls lost 24-23 to Marshall, and the lone Florida Atlantic victories have come over in-state rival South Florida in Week 3 and a 37-23 win over the UAB Blazers on Oct 5.

Jaquez Johnson is the dual-threat QB of Florida Atlantic that may be responsible if the Owls are to win over Tulane. He’s thrown 58.9 percent for completion this season but also rushed for an additional 399 yards on 105 carries. Jonathan Wallace is also a decent back for Florida Atlantic with 530 yards on 110 carries.

Check out our paid pick plans for the 2013-14 NCAA Football season!