Posted on October 17, 2014 by Brett David Roberts in College Football,Headlines 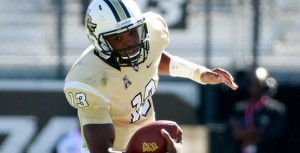 The UCF Knights have rallied after losing its first two games to tough teams, Penn State and then-No. 20 Mizzou. Wins over Bethune Cookman, Houston and BYU have pulled UCF to a 3-2 record, but the team lingers far behind last year’s ranked team that shocked the NCAA with Blake Bortles and Storm Johnson playing superb football. Both were drafted by the Jacksonville Jaguars, and UCF is struggling to get back its brilliance from last season. Nonetheless, college football oddsmakers don’t expect the Knights to have much trouble with Tulane this week, setting the line 20-points in favor of the home team.

Justin Holman has hardly been the QB Bortles was, though he isn’t bad per se. He’s thrown for 985 yards on 56.2 percent completion, but he has twice as many TDs (8) as he has INTs (4). His yards per reception ranks low at 7.58 yards per game, but keeping his picks down will help the Knights a lot this season, of course.

In the backfield William Stanback has been the primary ball carrier, but he’s averaging just 3.4 yards per carry, and the No. 2 rusher (QB Holman) is only managing 2.1 per carry. Both Stanback and Holman have scored three rushing TDs this season.

Breshad Perriman has impressed at WR. Though he’s only caught 15 passes on the year, he’s averaging 22.7 yards per catch and has a 61-yard reception TD this year, while Josh Reese is the No. 2 WR with 185 yards on 10 catches. J.J. Worton rounds out the receiving corp, with 181 yards on 13 catches, and he scored a TD. Tulane will have worlds of problems contending with the pass game of the Knights, which is part of the reason college football odds project the Knights to crush them this week.

Tulane hasn’t been able to get much going offensively, averaging just 19.7 points per game, while the defense has surrendered 29.5 per game. The Green Wave took UConn down last week by a low scoring game of 12-3. The week prior, Rutgers smashed Tulane 31-6 after losing in Week 4 to Duke by 34 points.

The Green Wave rank near the bottom in passing yardage with just 196.3 per game. The rush has been slightly more effective, accounting for 170.3 yards per game. But the Green Wave has only scored 20 or more points in three contests, and all were against weak opponents, and the Wave only won one of those games.

Tulane QB Tommy Lee is doubtful for the game due to a shoulder injury, which will make it even tougher for Tulane to get any kind of offense going.