Posted on March 19, 2016 by Ken Langston in College Basketball,Headlines 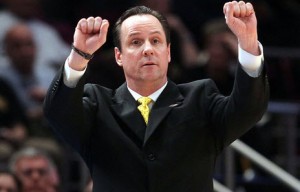 The 26-8 Wichita State Shockers have made deep tournament runs in 2013 and 2015 and were a #1 seed in 2014 before being upset by Kentucky in the second round. After being upset by Northern Iowa in the Missouri Valley Conference semifinals by Northern Iowa, Wichita State was selected for the first four against Vanderbilt. The Shockers beat Vanderbilt 70-50 in that game Tuesday night and then upset #6 Arizona Thursday night in the South Region first round in Providence. Next up for the Shockers is a date with the #3 seed Miami Hurricanes of the ACC Saturday also in Providence. The Hurricanes are 26-7 this season and beat #14 seed Buffalo 79-72 in the first round. The winner between Miami and Wichita State will advance to the Sweet 16 next week in Louisville and face either #2 Villanova or #7 Iowa. Miami won the only previous meeting against Wichita State in 1988 in West Palm Beach Florida.

Wichita State won the Missouri Valley Conference regular season title with a 16-2 record. However, the Shockers were upset in the MVC semifinals 57-52 by Northern Iowa. Wichita State is making their fifth straight trip to the NCAA Tournament. The Shockers have won 25 games for an  NCAA record seventh straight season.

Wichita State is coached by Gregg Marshall. The Shockers have neutral site losses to USC, Alabama and Iowa in a tournament in Orlando and Northern Iowa in the MVC tournament in St. Louis, plus road losses at Tulsa, Seton Hall, and Illinois State, and a home loss to Northern Iowa. Wichita State has a neutral site win over Loyola-Illinois, plus road wins over Saint Louis, and home wins over Utah, UNLV and  Nevada.  Wichita State has conference wins over Evansville twice, Southern Illinois twice, Illinois State and Northern Iowa. The Shockers went 2-6 against NCAA Tournament teams. WSU is 20-12 ATS and the total is 13-18-1 this season. The Shockers were 1 point favorites against Arizona and the total was 136.

Miami is coached by Jim Larranaga. The Hurricanes tied for second in the ACC with Virginia at 13-5. Miami beat Virginia Tech in the quarterfinals of the ACC  Tournament in Washington, DC, but lost to Virginia 73-68 in the semifinals. Miami is making their eighth appearance in the NCAA Tournament and first since 2013.

Miami has a home loss to Northeastern, plus road losses at Virginia, Clemson, North Carolina State, North Carolina and Virginia Tech. Miami has neutral site wins over Mississippi State, Utah and Butler in a tournament in Puerto Rico, plus road wins at Nebraska, LaSalle, Boston College, Georgia Tech, Florida State and Notre Dame. The Hurricanes have home wins over Louisiana, Charlotte, Florida, College of Charleston, Princeton, Syracuse, Florida State, Wake Forest, Duke, Notre Dame, Pittsburgh, Virginia Tech, Virginia, and Louisville. Miami is 18-13-1 ATS and the total is 16-16 this season. The Hurricanes were 14 point favorites against Buffalo and the total was 148.

Check out our college basketball odds page for instant line updates on every game.

Both of these teams have a lot of veterans and are very talented. The Shockers have a chip on their shoulder because they feel slighted by having to play in the First Four. Miami certainly has the talent to make a deep run and it is a shame these two have to meet so early in the tournament. I like Wichita State to win a close game.

Maddux Sports is off to a hot start this basketball season, dont miss anymore winning picks, Click Here Now To Get These Winners!