Posted on February 3, 2014 by Jeff Mattinger in College Basketball,Headlines 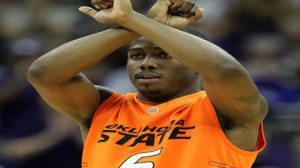 Iowa State has alternated wins and losses over its last four games, as it comes off a 81-75 victory over the Oklahoma Sooners as seven-point home favorites last Saturday, while going UNDER the betting total of 165.  The Cyclones are one of two schools nationally to have three players averaging at least 16 points per game, which is important to consider when making your college basketball predictions.  Senior forward Melvin Ejim is the Big 12 Conference’s top scorer at 18.1 points a contest.  Iowa State is 2-6 SU and 4-4 ATS as road underdogs of 6.5 to 9 points the last two-plus seasons.

The Cyclones lead the Big 12 in averaging 84.4 points per game, which has led directly to being the only team nationally to score 70 or more in every contest during the 2013-14 campaign.  Iowa State is 54-63 SU all-time against Oklahoma State, but has dropped 18-straight games at Gallagher-Iba Arena, but the last four meetings at this venue have been decided by an average of 3.5 points.

Oklahoma State is 1-3 SUATS in its last four games, as it attempts to bounce back from a 76-70 defeat to the Baylor Bears as 11.5-point home favorites last Saturday, while going OVER the betting total for a fourth consecutive contest.  The Cowboys have a scoring margin of +15.7 points per game, which can’t be ignored when looking over the college basketball odds page.  The squad has three probable starters averaging in double figures, with point guard Marcus Smart scoring 17.2 points a contest.  Oklahoma State is 3-0 SU and 0-3 ATS as home favorites of 6.5 to 9 points the last two-plus seasons.

The Cowboys have won six of eight games against the Cyclones when playing as a ranked team in the Big 12 era.  Oklahoma State is 10-1 at home this season—shooting 37.5 percent from beyond the arc in front of its fans and holding foes to just 30.2 percent in that situation.

Sports bettors will likely back the Cyclones due to the Cowboys being 9-22 ATS in their last 31 games versus teams with a winning record.