Posted on February 27, 2014 by Jeff Mattinger in College Basketball,Headlines 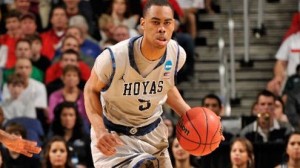 Georgetown snapped a two-game losing streak last Saturday, as it picked up a 74-52 blowout victory over the Xavier Musketeers as two-point home favorites, while going UNDER the betting total for the first time in five contests.  The Hoyas are led by senior guard Markel Starks, who has started all 27 games and is averaging 36.8 minutes of playing time per game, which can’t be ignored when looking over the college basketball odds page.  Starks ranks sixth in the Big East Conference in scoring 16.5 points a contest.  Georgetown is 2-3 SUATS as road underdogs of 3.5 to 6 points the last two-plus seasons.

The Hoyas are 8-8 SU all-time against the Golden Eagles, but have dropped five of seven meetings in Milwaukee, including the last four inside the Bradley Center.  Starks certainly isn’t a one man band offensively, as he joins up with fellow guard D’Vauntes Smith-Rivera to score 33.5 points a game.

Marquette has won four of its last five games, including a 96-94 overtime victory over the DePaul Blue Demons as seven-point road favorites last Saturday, while going OVER the betting total for a fifth consecutive contest.  The Golden Eagles are 6-4 SU against the Hoyas under head coach Buzz Williams, which is important to consider when making your college basketball predictions.  Senior forward Davante Gardner tops the roster in scoring 14.7 points per game despite the fact that he’s on the court for just 26.4 minutes per contest.  Marquette is 7-0 SUATS as home favorites of 3.5 to 6 points the last two-plus seasons.

The Golden Eagles have 11 active scholarship players averaging at least 10 minutes per contest.  Marquette has compiled a dominating 58-4 SU record when shooting 50 percent or better from the field since the 2008-09 campaign—a number that’ll be tough to reach against a rival in this affair.

Sports bettors will likely back the Golden Eagles due to the Hoyas being 0-4 ATS in their last four road games versus a team with a winning home record.