Posted on October 31, 2015 by Brett David Roberts in College Football,Headlines 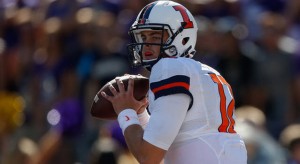 Penn State is 6-2 on the season and won 31-30 last week over Maryland. This week it will take on Illinois at home in a game the Nittany Lions are 6-point favorites in. The over/under is 43 for the game that will air at 11 AM Central Time on ESPN2.

Penn State must first begin to explain its 38-10 drubbing by Ohio State, but last week’s edging of Maryland certainly raised many of the same issues. At hand was the destruction of the Nittany Lions defense by two talented QBs and further questions how it will be able to prevent Wes Lunt from imposing the same disaster again this week.

While Lunt may lack the mobility of Ohio State’s J.T. Barrett, the Fighting Illini offense does a good job of giving Lunt plenty of time to throw the football. He has been sacked just eight times, and the Nittany Lions are going to have to find a way to disrupt Illinois’ passing game.

Lunt has thrown for 1,702 yards this season with nine TDs and three INTs. His top target is Geronimo Allison, who leads the team in receptions (48), yardage (700) and touchdowns (3). Allison is a 6’4” senior who caught for 598 yards last season. He has caught eight or more passes the past four games, and he had over 90 yards in each game, as well.

Check out our sportsbooks reviews!

If the Nittany Lions can’t rush Lunt effectively, how can its secondary deal with the problems Allison poses? There is a reason why the 4-3 Illini are not big underdogs in this contest against a seemingly more formidable team like PSU.

Christian Hackenberg has been a continued disappointment for the Nittany Lions. He has thrown just 51 percent for completion with a 7.38 yards per attempt average, and his passer rating is 129.6. The junior was receiving stir for a potential No. 1 NFL pick, but he has been unable to recapture the brilliance of his freshman season, though he has done well at avoiding picks (just two) this season.

Saquon Barkley has helped carry PSU from the backfield. The 5’11” 215 pound freshman RB has 632 yards on 88 attempts (7.2 yards per carry) with four TDs on the year as well as a 22-yard TD catch. He struggled last week against Maryland with just 65 yards on a 20 attempt work load, but he did manage a TD in the game. Against OSU on Oct 17, he rushed for 194 yards on 26 carries but failed to get in the end zone.

CHECK OUT OUR SEASON PICK PLANS TO GET IN ON THE WINNINGS!