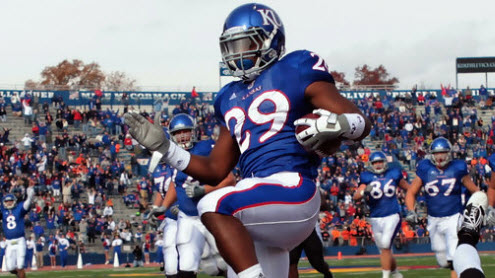 Iowa State is winless in its seven Big 12 games this season, but the Cyclones are expected to pick up its first conference victory according to college football oddsmakers at Bovada, who find the Cyclones to be 4-point favorites over the visiting Kansas Jayhawks in Big 12 action Saturday.

Iowa State is just 1-9 overall on the season and its lone victory was over lowly Tulsa on Sept 26. The Cyclones have been weak on both sides of the ball, scoring just 21.2 points per game while allowing 38.8 per game. The team has had a tough schedule with four ranked opponents, and the team nearly did knock of then-No. 20 Texas Tech on Oct 12. Last week, the defense allowed 48 points from Oklahoma and the team again scored just 10.

The Cyclones haven’t had the greatest quarterback play with Sam Richardson and Grant Rahach both averaging just 55.3 and 53.0 percent completion ratios, respectively. And the team also doesn’t have any big yardage backs with Aaron Wimberly leading the way with just 4.1 yards per carry on his 113 attempts.

Kansas is just 1-6 in Big 12 play and the team is 3-7 overall. The Jayhawks have struggled badly offensively this season and failed to score 20 or more in six consecutive weeks, all losses, prior to last week’s 31-19 win over West Virginia.

James Sims is Kansas’ best offensive player and the back has 914 yards on 187 carries this season, as well as 145 receiving yards on 21 catches. Jake Heaps is a middling talent at QB, but Sims is the best thing the Jayhawks have going. It likely won’t be enough against Iowa State.

Check out our paid pick plans for college football season!