Posted on April 11, 2018 by Brett David Roberts in Headlines,NBA 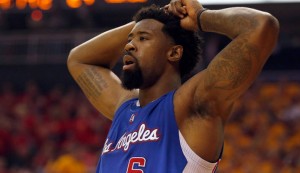 Los Angeles may have dealt superstar Blake Griffin, but it still retained leading scorer Lou Williams and re-signed him to a contract. He is averaging 23.3 points 2.5 rebounds and 5.3 assists in 32.5 minutes a night. The Clippers seemingly have just slid new acquisition Tobias Harris directly into the role once occupied by Griffin, and the role has been a revelation for Harris.?Through his first two games (both wins) he averaged 21.5 points, 4.5 rebounds and two assists per game while posting a PER of 17.4. Albeit, those figures are all shy of what Griffin did, but not tremendously so.

Rivers is really pretty damn good for a guy who had already been billed a bust.

This year, Rivers is averaging 15.8 points and 3.6 assists per game in 32 minutes a night, thriving as a three-positional talent that surely was expected to be this good, if only on his father’s legacy. DeAndre Jordan was thought to be a trade target for several teams, but he remains in Los Angeles.

It was rumored the Clippers offered him to Houston in exchange for Clint Capela and were rebuked, but this writer makes no claim to such sources or validates the validity of said-rumors. No matter the case, Jordan forms the third part of a staunch frontline for the Clippers and the team hardly lacks in depth.

Veteran combo guard Avery Bradley was also acquired with Harris, and he is generally regarded as one of the most underrated players and best one-on-one perimeter defenders in the Association. Bradley is averaging just 10 points and three assists through his first two games, but the last outing he was an efficient 6 of 10 from the floor with three steals.?He makes his impact, in short.

The Clippers might not be the chic pick as true contenders, but it reasons that L.A. can absolutely sneak into the playoffs and be a formidable opponent (in other words not be swept necessarily) to one of the top-tier teams in the West.

The team has sufficient leadership, talent, and just because its identity is not really the same without Chris Paul and Blake Griffin does not mean that these pros cannot come together to gel quickly before the postseason arrives. L.A. should remain on the radar of dark horse sneaky teams that have gone under the radar. There is enough talent on the roster to put up a fight.

The Lakers have won four of its last 10 games, with victories over Dallas, Sacramento, Atlanta and Miami.
Three of those four teams are out of the playoff chase, and the Lakers have been playing their best ball of the season. The Lakers hung 131 points on the defensive-oriented Miami Heat in a 131-113 win, as Isaiah Thomas recaptured some of his mojo in scoring 29 points on 11 of 20 shooting.

Power forward Julius Randle also had a big game, scoring 25 points and grabbing six boards while starting and playing 34 minutes. Former starter Kyle Kuzma came off the bench behind Randle to hit 6 of 10 from the floor in 28 minutes en route to 16 points.

The Lakers have been starting Lonzo Ball at the 1-spot, and the rookie came through with eight points, six steals, seven assists and six rebounds while posting a team-best +24 in his 34 minutes on the court. Ball does so many of the small things, and he is really making an impact as the numbers reflect the Lakers playing better ball with the former UCLA guard on the court. Ball has averaged 7.5 points and six assists in three games since returning from injury, but his game against the Heat was probably his best since returning from injury.

Miami Heat guard Dwyane Wade was imp ssed, and called himself a “fan” of Lonzo Ball, and Luke Walton said he was “the best player on the court, though he only shot five times,” adding, “He is a unique player who can impact the game all over.” The Lakers may have a long-shot to make the postseason, but with the pieces coming together and the way the team is playing, the future is probably far brighter far sooner than most have anticipated. Ball is the real deal, even if the hype from his father has cast a light on him far brighter than he wanted to deal with.