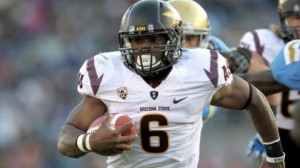 Running back Cameron Marshall enters his senior season and is poised for big things, but are the Sun Devils?[/caption2011 Record:  6-7, 4-5 Pac 12

Todd Graham will be entering his first year with the Sun Devils.  He inherits a poor offense.  ASU has to replace its staring QB and its top 3 receivers, after having a good year throwing the ball last year, finishing 3rd in the Pac-12 in passing yardage with 316.7 yards per game in the air.

Losing QB Brock Osweiler hurts a lot, as he went pro after his outstanding year.  Replacing him will be either So. Mike Bercovici or redshirt freshman Michael Eubank, but neither have started a single game in their careers so far, so the inexperience is expected to make the Sun Devils a worse team than they were a year ago, and Athlon magazine predicts a 3-6 Pac-12 record for them.  Eubank is the better athlete, which may serve him better in Graham’s offense, though Bercovici did win the backup job last year.

The lack of experience at QB and wideout is going to be a problem all year.  They have no legit No. 1 receiver and it’s good they have some talent to cover for it in the backfield.  Cameron Marshall rushed for 1000+ yards in 2011 on a bad ankle and they’re going to need more of that this year with such low expectations for an aerial attack.

ASU lost both of their starting safeties and three of their LBs.  Their best pass rusher, Junior Onyenali, was suspended for all of spring. Onyeali needs to be in good standing and eligible to play for this team to have any chance of improving a defense that ranked 9th of 12 last year in conference play.

LB will just be a huge problem, is all.  Brandon Magee must remain healthy.

They will employ a 4-3 base and use one on one coverage at the corners, as cornerback is actually a strength on an otherwise poor defense.  Still, the room for improvement is huge, as they finished 10th of 12 in pass defense last year, giving up 273 yards per game.  They need consistency from the DL to improve this, though, as they were just giving QBs way too much time to throw.  They gave up an average of 40 points per game in the last five games of the year, all of which were losses.

ASU will be strong in returns behind the efforts of Jamal Miles, who had three returns for TDs last year.

Their punter Josh Hubner should be very good, as well, but they can’t get another inconsistent year from placekicker ALex Garoutte, who made only 15 of 22 attempts in 2011 and missed a lot of very crucial ones.

Graham has a lot of work to do with this team, and it’s likely they regress from an already poor year last year.  They need to get experience for their QBs so this will be a year of growth for the Sun Devils.  They also have a very difficult schedule, as they end the year with 3 of the final 4 on the road.  If they can pull a 6-6 year, Graham will be pleased, despite no coach ever admitting that winning half the games is the ultimate goal.