Posted on November 19, 2016 by Brett David Roberts in College Football,Headlines 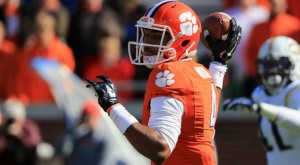 The Clemson Tigers quest for an undefeated season came to its end last week as Clemson fell 43-42 to Pittsburgh, losing on a 48-yard field goal with six seconds to go. The loss dropped Clemson from No. 2 ranking to a No. 4, and it will try to regroup on the road against Wake Forest as 22.5 point favorites according to college football oddsmakers at 5dimes.

Last week the Tigers lost despite a herculean effort from Heisman candidate Deshaun Watson. He threw 70 passes (completing 52) for 580 yards and three TDs, but he did throw three picks in the game. Wayne Gallman rushed for just 36 yards on 18 carries, but he had three TD rushes. Clemson managed just 50 rushing yards. Wide receivers Mike Williams and Artavis Scott had big days with 202 and 125 yards, respectively, while each scoring a TD. Clemson averaged 11.2 yards per pass attempt on its 52 catches, with all top-five receivers having at least a 25-yard play in the game.

The problem for Clemson was stopping Pitt’s well-rounded attack. The Panthers had 156 rushing yards, with 132 coming from James Connor on 20 rush attempts. Scott Orndoff caught nine passes for 128 yards and two TDs, and Connor had three receptions for 57 yards and a receiving TD. Saleem Brightwell, Ryan Lewis and Avonte Maddox all had interceptions for Pitt, and Blewitt hit his 48-yard field goal to go 1 of 2 and 4 of 5 on PATs.

Punter Ryan Winslow attempted five for an average of 43.4 with a long of 52-yards. Clemson punter Andy Teasdell averaged just 37.7 yards on his three attempts, and kicker Greg Huegel did not attempt a field goal. He his 13 of 16 on the season and has hit 9 of 10 from 39 yards and inwards. His long is 47 yards.

Artavis Scott did a good job on kick returns with seven for an average of 17.1 yards per return. Defensively, Ben Boulware and Kendall Joseph both came up big, as did Dorian O’Daniel. Boulware had 12 tackles, Joseph had 10, and Daniel had nine (six solo), a sack and 1.5 tackles for loss. Clemson had two sacks and eight tackles for loss in the game.

Deshaun Watson now has 3,000 yards on the season and has completed 66.2 percent of his passes. He has thrown 27 TDs and 13 INTs, and has a passer rating of 149.2. Watson has rushed for 378 yards on 100 carries with two rushing TDs, while Gallman has contributed 670 yards on 138 carries (4.9 yards per) with 11 rushing TDs. Gallman has caught 13 passes for 85 yards, as well. Mike Williams leads the tea with 956 receiving yards on 67 catches with six TDs. Deon Cain leads the team in receiving TDs with nine. Clemson has scored 31 receiving TDs on the year to its 16 rushing TDs.

Wake Forest is 6-4 and 3-3 in ACC play. The Demon Deacons lost badly to Louisville last week, falling 44-12, and the team has lost three of its past four with losses to then-No. 14 FSU and Army and a 27-20 victory over Virginia sandwiched between two weeks ago. The Deon Deacons have a strong defensive team, allowing just 21 points per game and Ranking No. 22 in the nation, but it it is equally as futile offensively. Wake averages just 20.4 points per game (No. 120), and it gets precious little from its rush offense (164.8 yards per game) which ranks No. 113 among FBS schools.

John Wolford has been woeful, with just 1,454 yards on the season on 56 percent passing. His 5.89 yards per attempt ranks among the worst, and he has more interceptions (seven) than TDs (five). He has been good rushing the ball with 454 yards on 107 attempts, but Wake has just five receiving TDs on the year. Matt Colburn is the No. 1 back with 490 yards, but it has taken him 120 attempts and he has just one TD on the year. Tabari Hines and Cortez Lewis both have caught for over 300 yards but only Hines has a TD (2). The Demon Deacons cannot score to stay in a game with Clemson, but its defense should be up to the task somewhat. Wake still is worthy of being a heavy dog as it is.