Posted on October 25, 2013 by Brett David Roberts in College Football,Headlines 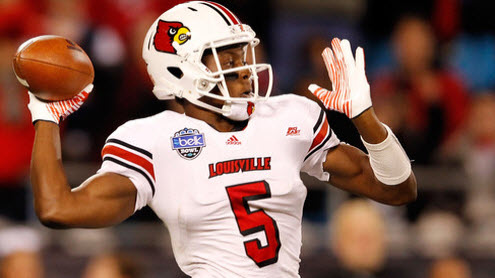 The 20th ranked Louisville Cardinals are 21-point favorites over South Florida according to college football oddsmakers at Bovada. The Cardinals suffered its first loss 38-35 to UCF on Oct 18 and the team is now 2-1 in the AAC since UCF is now a conference opponent.

The pass offense should rebound well against South Florida, a team that allows 30.2 points per game and gave up 375 passing yards to the Miami Hurricanes. Teddy Bridgewater will look to exploit the Bulls’ secondary and reach his targets DeVante Parker (26 receptions), Damian Copeland (28) and Eli Rogers (27).

Senorise Perry has wrecked his usual havoc rushing the ball and has 420 yards on 75 carries this season with five TDs, as well. Dominque Brown has emerged as a good second candidate to carry the ball and Michael Dyer has experienced success, too. The Cards as a team have rushed for 1,161 yards, which ranks the team 67th in the nation in rushing yards per game (165.9).

South Florida experienced a rough start to the season and lost its first four contests, but since then the South Florida Bulls have rebounded with back-to-back wins over Cincinnati and UConn. The team had a bye week last week, but will find it tough to keep its winning ways going against a nationally ranked opponent.

The Bulls will also encounter SMU and the 23rd ranked UCF Knights this season, before closing it out at Rutgers. So, the path to improvement will be difficult for the Bulls, who rank near the bottom of the nation in both pass and rush yardage (138.2 per game, and 120.3 per game, respectively).

The Bulls can’t manage to get much up on the scoreboard, averaging just 16.2 per game, but the fact that the defense has allowed some big numbers from the likes of McNeese State and Florida Atlantic, is alarming.