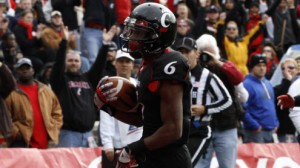 The Cincinnati Bearcats improved to 4-0 last week with its 34-30 win over Ohio. This week it hosts UConn as 17.5-point favorites at 2:30 PM (CT) on CBS. The over/under is set at 59.5 points according to NCAA football oddsmakers at bookmaker 5dimes.

Cincinnati surrendered a season-high 30 points to Ohio last week, but managed to win on the strength of Desmond Ridder’s 19 of 29 passing. Ridder amassed 274 yards and two touchdowns, though he did throw a pick. The backfield was paced by the one-man show of Michael Warren II, who compiled 124 yards on 23 attempts with two TDs.

Ridder added 28 yards, as well, and a rushing TD. Top receiver Rashad Medaris caught just three passes but led the team with 104 yards, mainly due to a 77-yard reception. Josiah Deguara caught six passes for 69 yards, and Cincy averaged 14.4 yards-per-attempt. The Bearcats trailed by six entering the fourth quarter but outscored Ohio 13-3 in the final quarter to remain undefeated on the season.

Ridder has been sensational for the most part through four games. The freshman looks to be a major force for years to come in the AAC, standing a strong 6’4” and with the arm to make good on his looks: his 63.5 percent completion ratio is solid, to go along with six TDs and just one INT on the season, good for a 157.7 passer rating. He has also rushed for 100 yards in a game this season, as he ran 18 times for that 100 yards in the Week 2 victory over Miami (Ohio).

Warren is looking even better in his sophomore season after rushing for 324 yards last year as a true freshman. He is averaging 4.7 yards-per-carry and doing all the carries for the Bearcats (outside of Ridder), and his eight TDs through four games put him in the runnings for an All-Conference selection this year, certainly. Expect Warren and Ridder to carry the Bearcats as heavy favorites in this week’s matchup—the duo is talented enough to produce offense by itself, and Cincy has other solid players at the skill positions, though it does not turn to anyone but Warren for the ground game.

Connecticut lost 21-51 last week to Syracuse to fall to 1-3 on the season. Its lone win thus far was a Week 3 victory over Rhode Island, but excluding that lone victory, the defense has been pretty horrible for the Huskies. UConn is allowing a third-worst 54.5 points per game while not even scoring half of that itself (25.3). The rushing attack has been passable at best, and its passing game is weak to be kind on the matter…

David Pindell has done a fair job at quarterback but is only managing 7.04 yards per attempt on his 75 completions. He has also thrown three interceptions already, though his seven touchdowns somewhat offset that (not really, in light of the losses). Pindell also leads the team in rushing yardage and rushing TDs, as pretty much a one-man show with the help of five receivers all of whom have caught for 100-yards plus.

UConn suffices as a decent passing team, but with a shortage of quality backfield options and a pitiful defense, the passing will not carry them too far, in the AAC, nor against non-conference foes. It is headed for yet another bowl miss, and another losing season—but this was all fairly expected. The Huskies will have to focus recruiting efforts on finding some defensive playmakers and quality tacklers because teams are currently simply running wherever they wish against UConn.

That does not bode well considering the strength of Cincy’s offense. This game probably will not be closer than two touchdowns, and the Bearcats have a chance to really blow the Huskies out in Week 5.