Posted on October 31, 2014 by Brett David Roberts in College Football,Headlines 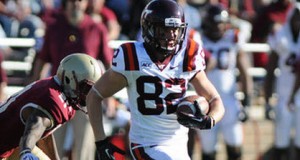 Virginia Tech is 4-4 on the season with a 1-3 record in the ACC, but the disappointment may be ameliorated some this week as three-point favorites against Boston College according to college football odds.

The Boston College Eagles have been heavily reliant on the rush, averaging 277 yards per game. The pass game, however, lingers far behind, accounting for just 134.4 yards per game. In addition to that, the Eagles defense has kept them in games, allowing just 18.8 points per game to opponents. It’s a big reason the college football odds have a low point total of just 40.5

Eagles QB Tyler Murphy has accounted for over 1,900 yards total, about 1,000 from passing the football. He leads the team in yards per carry, with 7.5 per attempt. He’s rushed for the second most TDs on the team with eight, and leading running back Jon Hilliman has been productive in his own right, with 572 yards and a team-leading nine TDs. In addition to Murphy and Hillman, the Eagles have four other backs with at least 100 yards on the season, the quartet having accounted for five TDs between them.

Virginia Tech has a plus 4.3 point differential this season, but it has been the defense that has been largely responsible for that. VT ranks 29th in the nation, surrendering just 21.3 points per game. That stat is bolstered by having defeated William and Mary 34-9 in Week 1, and the D hasn’t been enough to overcome tougher teams. Pittsburgh and Miami (FL) dispatched the Hokies the last two weeks by a combined score of 51-22.

Hokies QB Michael Brewer has been ineffective, throwing as many INTs (11) as TDs. He’s completed 61.4 percent of his passes, but the miscues have been costly.

In the backfield, VT has a couple of decent options in Marshawn Williams and Shai McKenzie. Williams is averaging 4.1 yards per carry and has three TDs on the year. McKenzie, while far behind in yardage, has a better yard-per carry of 5.1 yards and has also accounted for three TDs. Even so, the Hokies have just nine rushing TDs to its 12 passing.

Isaiah Ford, Cam Phillips, Bucky Hodges and Willie Byrn all have 250 yards or more and have accounted for all but one rushing TD on the year. Ford has five of them with a 13.1 yard per reception average.