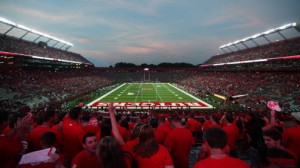 Chris Ash has tried valiantly to pump up the Rutgers offense over the past two seasons. Mostly unsuccessful, the Scarlet Knights have compiled a 6-18 record under Ash over the past two seasons, but there are some reasons for optimism heading into the 2018 season. First off, the Knights bring back offensive coordinator John McNulty, and he will have the chance to work with freshman quarterback Artur Sitkowski.

Sitkowski should be an improvement at the QB position, if not just because he has a strong arm and is quite mobile behind the line. The problem is that outside of his talent, the Knights have a lot of youth and inexperience at the other skill positions. Running back Raheem Blackshear and WR Bo Melton are both young, but good. The Knights also have a top-shelf TE in NFL prospect Jerome Washington.

To say the offense will be equally as disgusting as past seasons is to ignore the collection of talents coming together in Piscataway. Most problematic for the Knights will be its OL, which only returns two: Tariq Cole and Kamaal Seymour. The Knights will round out that five with the trio of Jonah Jackson, Nick Krimin and Mike Maletti. All three are decent, but they are just as unproven.

If the Knights can get strong play out of its OL, the offense could be vastly improved this season. Sitkowski completed 45-of-79 passes for 370 yards and two TDs as a senior in high school at the IMG Academy, and he spent the first three years of his high school career at nearby Old Bridge High School, which is a 20-minute drive from Rutgers.

So, Sitkowski should feel relatively at home as he makes his transition onto the NCAA stage. He certainly has his work cut out for him, but with McNulty returning to coordinate the offense and Sitkowski being far more talented than what Rutgers has had at QB in the past, the offense should at least be improved.

After all, considering that the Knights averaged just 18.0 points per game last season and threw for an average of 115.6 yards per game, the bar is set rather low. The Knights ranked No. 128 in the nation in total yardage, amassing just a paltry 262.7 yards per game a year ago. Improvement is not assured, but it is a safe prospect to expect the Knights to become more competent on that end of the football in 2018.

Rutgers made tremendous strides defensively last season, allowing just 28.3 points per game, which was a marked improvement over the 37.5 allowed in 2016. Rutgers may switch to a base 3-4 this season, and with strong cornerbacks, the team will not have to rely on as much help from the safeties while playing man coverage.

Blessuan Austin returns from ACL surgery and at the other corner, the Knights will have Isaiah Wharton, who is experienced and talented. The safety position is less clear, though the Knights will likely turn to KJ Gray, who had 58 tackles and two interceptions in 2017. At LB, Rutgers returns leading-tackler Trevor Morris who compiled 118 tackles last season, while Deonte Roberts was good for another 104 tackles.

Rutgers will have to figure out a way to replace the production of NFL-drafted DL Kemoko Turay and Sebastian Joseph. Defensive ends Kevin Wilkins and Elorm Lumor both improved a lot last season, and DT Jon Bateky and Julius Turner combined for 56 tackles while gaining valuable experience.

Rutgers fielded a decent defense last year, despite not excelling at either the pass or run defense, ranking No. 55 and No. 83 in the nation in both, respectively. Nevertheless, there are far fewer questions about the Scarlet Knights’ defense than there is about their offense. Maybe that changes this year, but Rutgers’ “D” will give the team a chance to win games, provided it gets far better offensive production than it has thus far in the Ash era.

At kicker, the Knights lost Janarion Grant. Punt returns will be handled by Hunter Hayek, while kick returns will go to Raheem Blackshear. Adam Korsak is an Australian football player who will handle the punting, and Justin Davidovicz will be the field goal kicker.

Overall, Rutgers is on the rise. Its offense has to improve, but it really should with a solid QB and a good OC again. The Knights’ schedule is tough in the early going, and it will have to manage to win at least a couple of the matchups against Wisconsin, Michigan, Michigan State and Penn State.

That is a rather tough billing. Overall, Rutgers’ season prospects hinge on how well its freshman quarterback can adjust to big-time college football, but at least the Knights do, in fact, have a quality prospect at QB. Ending the season with three losses last year was a tough blow, but perhaps getting blanked 41-0 by Indiana was the cherry on that crap sundae. The Knights look to improve this year, but it happens one step at a time, so be patient.