Posted on August 9, 2018 by Brett David Roberts in College Football,Headlines 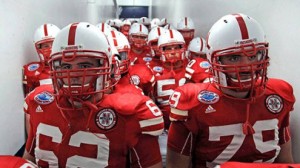 The Nebraska Cornhuskers are trying to return to glory, and to do so it hired Scott Frost whose UCF Knights led the nation in scoring last season with its fast-tempo offense. Frost will bring those tactics to Nebraska, but it is curious as to how it might fare in a conference like the Big Ten, one known for strong defenses. It is hardly the AAC that Frost is used to.

The quarterback position remains up in the air, but ESPN has predicted that Adrian Martinez is the one who will emerge as the starter. Also in the mix are Tristan Gebbia and Andrew Bunch. While the QB position will be settled in due time, the Huskers strength is really its backfield at any rate. It returns its top rushers and its top receivers to the team, while the OL returns eight players who started at least one game last season.

Last year was really anomalous for this program, as it managed just 107.5 rushing yards per game, and Frost wants to pretty much double that figure this year. JUCO transfer back Greg Bell will factor big in those plans, but Nebraska’s run game really has not been the same since Ameer Abdullah graduated some three seasons ago. Bell is nearly as good perhaps, and he could transfer an offense that averaged just 25.8 points per game while ranking No. 84 in the nation last season. The rush was ranked No. 119, which is about as un-Nebraska as it has ever been.

Nebraska’s defense was a sheer disaster last year. It allowed 36.4 points per game and 5.57 yards per rush. There was little to no stopping much of anything, and it replaced its defensive coordinator with newcomer Erik Chinander. He is known for aggressive and blitzing schemes, and he prides his units on their ability to create turnovers. Sometimes that backfires, but one cannot imagine it being much worse than last season’s nightly failures.

For starters, he has a much more experienced and above-average front seven, with Mick Stoltenberg at nose tackle and ILB Dedrick Young being its stars.

The safeties Aaron Williams and Antonio Reed are both strong, but both are slightly injury prone, too. The secondary does lack depth, however, and the corners need to be better at covering the deep passes to be sure. In the spring they were not really tested on deep plays, and teams might suspect that was just a bluff. It is the Achilles heel of a rather weak defense open to being exploited.

Caleb Lightbourn averaged 42.1 yards per punt last season, and he is likely to also handle kickoffs this year. That is because the placekickers stunk it up in the spring game. Barrett Pickering has an accurate leg for short field goals, but there are questions as to whether he has the power to knock in the deep ones.

Nebraska had one of its poorest seasons in a while a year ago, and it made the changes (while taking the chances, too) to ensure thing will at least be, well, different. There is sufficient talent on the roster, but it is not without its inexperienced positions and its weaknesses.

Nevertheless, the rush game should be more back to Nebraska’s standards and its defense is good if it can shore up some rather vulnerable aspects (such as its secondary). The Huskers should return to a Bowl game this year, in a best-case scenario, but it is not a threat to win the division or the Big Ten. Not yet.