Posted on August 7, 2014 by Ken Langston in College Football,Headlines 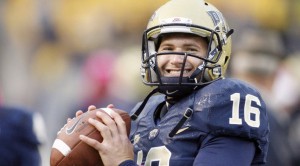 Last season, the Pittsburgh Panthers joined the ACC after many years in the Big East. They started off the season with a blowout loss to eventual national champion Florida State. The Panthers would then win 3 straight games including a wild 58-55 win over Duke. Pitt would go 3-5 for the rest of the regular season with losses to Virginia Tech, Navy, Georgia Tech, North Carolina and Miami. The Panthers would upset Notre Dame at home. Pitt qualified for a bowl and beat MAC champion Bowling Green 30-27 in the Little Caesars Bowl in Detroit.

Thirteen starters are back for head coach Paul Chryst. The Panthers are in a tough division in the ACC with North Carolina, Virginia Tech and Miami.

Sophomore quarterback Chad Voytik replaces Tom Savage. Savage threw for 2,958 yards with 21 touchdowns and 9 interceptions. Savage is now with the Houston Texans. The dual threat Voytik threw only 11 passes last year but 9 of those came in the bowl game after Savage was injured. Voytik had a rushing touchdown in that game. Voytik threw for over 5,000 yards in high school.

Leading rushers James Conner and Isaac Bennett both return. Connor had 146 carries for 799 yards and 8 touchdowns, plus 3 catches. He rushed for 229 in the bowl game win. Issac Bennett had 171 carries for 797 yards and 7 touchdowns, along with 10 catches and a touchdown. No other Pitt player had more than 27 carries, but Voytik is much more mobile than pure pocket passer Savage and will get a lot of carries this year.

The offensive line returns four starters. However, the line struggled badly at protecting the quarterback. Pitt was #118 in sacks allowed. They weren’t much better at run blocking, and must show vast improvement in both categories in 2014.

Pittsburgh had a top 40 defense allowing 368 yards per game and 27 points per game. Five starters are back on Matt House’s defense. Still Pittsburgh would like to force more sacks and turnovers in 2014.

The defensive line must replace All-American tackle Aaron Donald who is now in the NFL with the St. Louis Rams. Tackles Darryl Render and Khaynin Mosley-Smith provide stability at the tackles. End Shakir Soto could be a rising star.

Cornerback Lafayette Pitts and safety Ray Vinopal lead a secondary that only had 8 interceptions last year.  Vinopal had two interceptions in the upset over Notre Dame.

Kicker Chris Bennett scored 82 points year including 14 of 18 field goals. Redshirt freshman Ryan Winslow takes over at punter for Matt Yokic. Boyd and Pitts will likely handle the return duties. Boyd had a punt return for a touchdown last year.

Pittsburgh has home non-conference games against Delaware, Iowa and Akron, and travels to Florida International. In conference Pitt travels to Boston College, Virginia, North Carolina and Miami. The Panthers host Virginia Tech, Georgia Tech, Duke and Syracuse. If the offensive line plays better I can see 7 wins and another bowl berthfor Pittsburgh.

Our college football handicappers are doing the research needed to make sure you get the most winners. Let us help you dominate the books this season.