Posted on March 23, 2014 by Brett David Roberts in College Basketball,Headlines 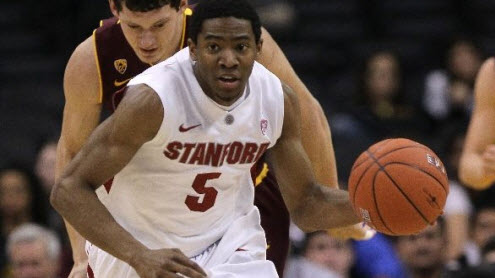 No. 2 seeded Kansas took care of Eastern Kentucky 80-69 to advance to a third round matchup against Stanford. The Cardinal beat New Mexico 58-53 in its second round matchup.

College basketball oddsmakers at Bovada are favoring the Kansas Jayhawks by 6.5 points over Stanford in NCAA Tournament play Sunday afternoon on CBS.

Stanford got 23 points from guard Casson Randle in the game against New Mexico. Randle hit 7-of-15 from the floor, including 3-of-6 fro three-point range, and also grabbed five rebounds and two steals. Randle averaged 18.9 points, 3.5 rebounds and 2.1 assists per game this season and the Cardinal also get double-digit scoring contributions from Dwight Powell, Anthony Brown and Josh Huestis. Huestis, a 6’7″ senior forward, averaged 8.2 rebounds and 1.9 blocks per game for Stanford this season and can be tough on the inside.

Kansas is still without center Joel Embiid, who will return in the Sweet 16 should Kansas advance here. Andrew Wiggins led the way offensively, and he’s been big lately. He had 19 points on 7-of-13 shooting, and Jamari Traylor scored 17 points in 22 minutes off the bench for the Jayhawks.

With Embiid sitting, Perry Ellis has picked up the slack. The forward had 14 points and 13 rebounds (4 offensive) in the game against Eastern Kentucky, and he’s capable of impacting the game on the boards and with the ball from the high post. Kansas is a tough team even without Embiid, and the college odds reflect it in the 6.5 points edge.