Posted on March 29, 2014 by Brett David Roberts in College Basketball,Headlines 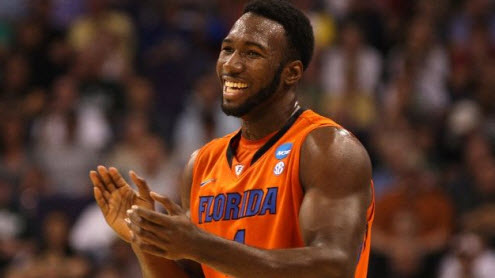 Getting past the hurdle of the Elite 8 has been a challenge for Florida in the last three NCAA Tournament appearances, but the Gators may have its easiest draw in an 11th seeded Dayton squad that has improbably reached this juncture with wins over Ohio State, Syracuse and Stanford. College basketball oddsmakers still heavily favor the Gators in this matchup setting the college basketball odds 10 points in favor of Billy Donovan’s squad.

Dayton’s leading scorer is 6’4” junior guard Jordan Sibert. Sibert scored 18 points on 7-of-12 shooting in the win over Stanford and he shot 45.9 percent from the floor and 43 percent from three-point range on the season. Sibert began his collegiate career at Ohio State, but transferred and has benefitted immensely from the increased role he has seen as a Flyer. 6’7” senior forward Devin Oliver has been big on the interior for Dayton, too. He had 10 rebounds in the win over Syracuse and 12 points, seven rebounds and three assists in the win over Stanford. Oliver has three-point range, too, connecting on over a three per game at a 38.4 percent clip.

Florida was able to defeat 4th seeded UCLA 79-68 to advance to the Elite Eight again. The Gators got 19 points, six rebounds and three assists from Michael Frazier II and three other Gators scored in double figures. Scottie Wilbekin had a off shooting night, hitting just 5-of-13 from the floor for his 13 points, but he kept UCLA’s 6’9” point guard Kyle Anderson in check, limiting the potential lottery pick’s scoring to 11 points on 4-of-11 shooting. Wilbekin and the Gators hit 8-of-21 from behind the arc, and that rate needs to be matched. The Gators also held a plus-10 advantage on the boards and hit its free throws (13-of-18, 72 percent).

Patric Young battled foul trouble in the win over UCLA, and the Gators ideally need more than 20 minutes from its starting center. Young averaged 10.8 points and 6.2 rebounds per game this season for the Gators but he has struggled in this tournament. Against Pitt, Young shot just 3-of-11 from the floor managing just seven points. He had a strong showing in the opening game against Albany, but hasn’t put a good game together since that contest. Young will want to close his NCAA career out strong before becoming an NBA player next year most likely.

Florida hasn’t lost since Dec 2 and it doesn’t seem likely that the Flyers are going to be the underdog to do it with the college basketball odds so heavily in Florida’s favor. The Gators have enough weapons that Casey Prather, Wilbekin, Young or any number of Gators can have an off night and the team still succeed. That’s how 29 game winning streaks are forged.