Posted on April 24, 2014 by Brett David Roberts in Headlines,NFL 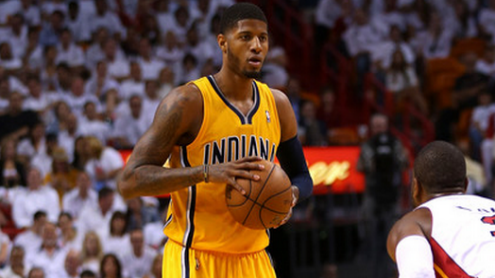 The Indiana Pacers came back Tuesday night to tie the best of seven series 1-1 with a 101-85 victory at Bankers Life Fieldhouse. The series shifts to Atlanta where the Hawks will still be 2-point underdogs to the Pacers according to NBA oddsmakers.

Paul George bounced back to have a big game two for the Pacers. The 2013 Most Improved Player of the Year hit 9-of-16 from the floor (including 5-of-7 from three-point range) en route to a game high 27 points. Luis Scola was also huge off the bench, contributing 20 points and seven rebounds.

The Pacers are searching for answers as to how to get Roy Hibbert more involved and productive. In Game two he missed six of his seven field goal attempts and finished with six points and four rebounds in 24 minutes of action.

Hibbert is averaging just 6.8 points and 3.7 rebounds over his last 10 games, and this is a guy who was selected to the All-Star team twice. In order for Indiana to be the dominant team it is capable of being, it needs Hibbert to play like the 7’2” monster he is at his absolute best.

The Hawks are heavily reliant on the tandem of Jeff Teague and Paul Millsap. Teague and Millsap combined to shoot 12-of-25, while the rest of the Hawks shot just 34 percent from the floor in game two.

It’s not as though the Hawks have a lot of easy places to go for offense, and it has to be remembered this is a team playing without its best player, Al Horford. Pero Antic is a woeful replacement and if it weren’t for the gross underperformance of Hibbert it would be more of a problem.