Posted on August 23, 2013 by Brett David Roberts in Headlines,NFL 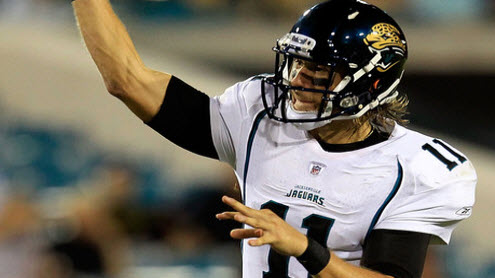 It took a while for the Jacksonville Jaguars to survey their team and definitively conclude that, yes, things were a disaster. The team had saddled itself with a $141 million payroll and stormed away with two victories. The team won four games in their inaugural season in 1995, and nearly two decades henceforth, they were worse than starting from scratch. So, the solution, ipso facto, was to start from scratch again.

The team brought in a new GM in Dave Caldwell, who proceeded to start to build the team. Caldwell came from the Falcons’ front office, and he then hired defensive coordinator Gus Bradley to be the new head coach. Caldwell is not looking to acquire nor keep older players, and he let a number of vets walk.

The Jags now have $28.3 million in cap space as a result, but they won’t be looking to spend it until they approach a more competitive state. In other words, Caldwell wants to take his time to do it right this time, since the team hasn’t had a double-digit win season since 2007, and has had only five in its 17-year history. Their early success as a franchise has almost been forgotten, as they haven’t made big waves since their conference championship appearances in ’96 and ’99.

Maurice Jones-Drew is the heart and sole of this very poor team. But Jones-Drew had foot surgery, and the Jags are hoping he’s able bodied the entire season. Can he withstand a 300-carry season again as he did prior to 2011? Jones-Drew rushed for over 1300 yards a season, but other than saving a couple of games, will it matter if he can’t?

That may seem hopelessly pessimistic, but the franchise player of the Jags is one whose health is perpetually in question. Then, at QB, they are still gambling with Blaine Gabbert, who was a 2011 first round pick. Gabbert’s success has been minimal, and he’s also battled injuries, including forearm/elbow surgery that caused him to miss the last six games of the 2012 season.

Gabbert is doubtfully the man, but Caldwell didn’t like any of the free agent options available. The reasonable conclusion is that the Jags will be looking for a QB in the upcoming drafts, and this year they will be slated for a high pick. Why so much about a guy whose promise is so low? Because the Jags really have no other good options either. Chad Henne is his replacement. Excitement galore.

The prospect of Jaguar success wouldn’t be so bleak if not for the fact that their defense is equally as putrid as their offense. Last season, they had the worst defense against rush, 22nd of 32 on passing, and the worst overall ranked defense as well. They allowed 380.5 yards per game last season, and much of the same can be expected this year.

Doubling their win total should probably be the goal in Jax this year. To go from two wins to four might not seem like shooting for the stars, but with no stars on the roster, what can be shot for? Fans are still hoping Maurice Jones-Drew can come through with some big plays, and outside of that, it’s just going to be a good time drinking beer and watching their team lose down in sunny Florida.