Posted on August 26, 2013 by Brett David Roberts in Headlines,NFL 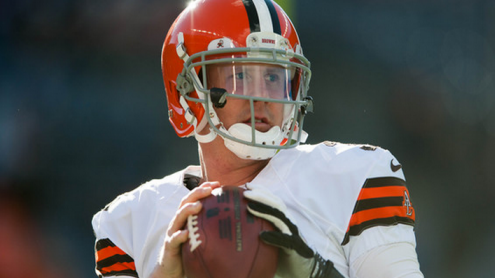 The Cleveland Browns keep finding new ways to be bad. This season will mark yet another with a new quarterback, renewed optimism, and so on and on. But will it really? Browns fans are looking at last season’s five wins and wondering how it could possibly be considered in any way respectable.

The team hasn’t won more than five games since 2007, and Brandon Weeden doesn’t seem like the QB that is going to radically transform this team, which is unfortunate since the only other options are even less inspiring in the likes of Jason Campbell. Weeden has an arm, but wasn’t much of a threat last season due to an inability to mesh well with the West Coast offense.

The Browns do have some excitement in the form of running back Trent Richardson, but there is an awful lot of hype for a back who managed just 3.6 yards per carry. The thing is, Richardson did that on a pitiful team, while injured, so the hype seems justified. The matter becomes more sticky when trying to determine whether or not Richardson goes from being a reasonably good running back to the type of talent that can actually change the losing culture in Cleveland.

Richardson was drafted No. 3 overall and has franchise talent, but he isn’t all that fast and he doesn’t elude tackles all that well. He did great at the goal line, which means he at the minimum will be a great niche runner his entire career, but at this point it’s just too early to say that Richardson can be enough to transform this team. The Browns are waiting on a quarterback, and pretending Weeden is the one in the time being.

One thing that does work on the sides of both Richardson and Weeden, however, is that the Browns have a very good offensive line. LT Joe Thomas is a six-time Pro Bowler. Alex Mack is a great center and right tackle Mitchell Schwartz appears to have a higher ceiling than expected, and should be a very good pro. All three have health concerns, but the Browns will bank on them being healthy so that Weeden and Richardson will be given full chance to bloom.

That seems like the best case scenario in Cleveland, and that’s not a lot to rally around for most fans. But Browns fans just want to be respectable at this point, and if centering their future hopes around a promising No. 3 pick like Richardson and a strong arm like Weeden’s is the best Browns fans have right now, then don’t take that away. If the OL stays healthy and Weeden begins to blossom, this team could sniff a .500 record, and that would be the best season in six years for Browns fans. Victory.