Posted on August 28, 2013 by Brett David Roberts in Headlines,NFL 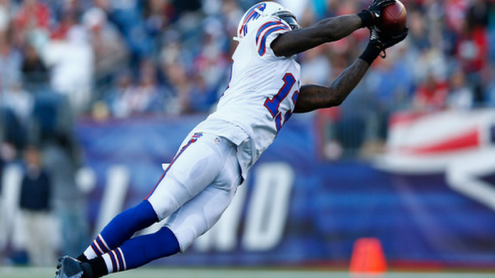 NFL Oddsmakers and fans seem to pretty much expect the same from the Buffalo Bills: a low finish in the AFC, a team with more questions than answers, and a team just trying to find something good to build on as they make their ascent back towards relevancy.

Last season, the club ranked 19th in offense and 22nd in defense, and they are banking heavily on the prospect of E.J. Manuel of FSU becoming the QB of the future. The team traded down to No. 16 overall to select the stud, whose talents rendered him an outside pick at Heisman early on before the loss to NC State.

Manuel is a gifted quarterback, and he was 25-6 at FSU in three-plus seasons. The Bills will be wise to give the reigns to Manuel early, rather than even bother with free-agent addition Kevin Kolb. Manuel has an NFL body at 6’5″ 237, so the team will look with eager anticipation as he develops.

The team also does have some talent in the backfield in C.J. Spiller, who just made his first Pro Bowl appearance. He is one of the handful of elite running backs in the NFL and ran for 1,244 yards last year with an average rush of 6.0 yards. He started just nine games and that certainly won’t be the case this year, so it stands to be the case that Spiller has a “breakout” seasons, of such, at least in the sense that he’ll have even more chances to break out for long runs.

Fred Jackson will be back in the fold after an injury-plagued 2012, and Jackson is a pretty solid running back all thing said. Spiller and Jackson should give the Bills a very good running attack.

The real problem with the offense will be Manuel is going to find himself short on passing options. His only good option really is Stevie Johnson, but it takes more than one good receiver to build any kind of real reliable pass offense. T.J. Graham and Brad Smith are the only two with any real experience, and neither really offers all that much.

Graham drops it a lot; Smith is basically a special teams player. The offensive line is also pretty mediocre, so Manuel likely won’t be given the luxury of having patience with his receivers. A rushed rookie never bodes well for an offense, even if he is gifted afoot and blessed with two good options to hand the ball off to.

The defense is also notably poor. It is particularly lacking in linebackers, where the Bills will count on Kiko Alonso (rookie) and Nigel Bradham (2nd year). The team ran a base 4-3 in 2012 and it produced little success. Shaking up the strategy with a defense that lacks experience and is low on talent will of course prove difficult.

Mike Pettine came from the Jets and usually uses a 3-4, but he has to try just about anything that seems to work given the lack of standout talents in his defense. The only certainty is that the Bills have to put more pressure on opposing quarterbacks.

There are these goals and objectives, but to consider the Bills anything other than a rebuilding team is folly. Bettors are not looking to place futures bets on the Bills, and oddsmakers at 5dimes don’t consider the men in green and white to be much of a threat either, placing their AFC Championship odds at +5000.