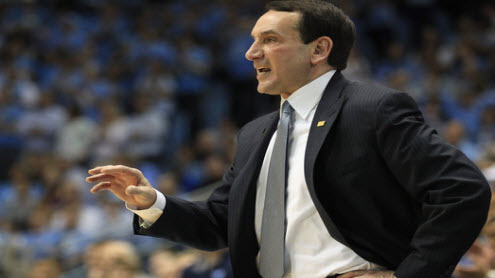 The Duke Blue Devils enter at 12/1 odds to win the NCAA title this season, and Coach Mike Krzyzewski’s team is as versatile as it is good this season, with a number of players capable of performing varied roles. Assistant coach Steve Wojciechowski raved that he “(Loves) the fact we have a number of guys who can play multiple positions.”

What the team has in versatility, it lacks in size, however, with 6’8″ Rodney Hood expected to carry a large load down in the post. With Ryan Kelly and Mason Plumlee gone to the NBA, Hood will find his plate quite large in combatting the bigger teams the Blue Devils face this season.

The Mississippi State transfer averaged 10.3 points per game two seasons ago and sat out his mandatory transfer season, so he’s primed to be a part of Duke basketball now. Woj said “he’s a very talented kid and can become one of the best players in the country.” If that’s true, it’s easy to see why he left Mississippi State for a perennial basketball powerhouse.

Freshman Jabari Parker is sure to draw a lot of attention, too, as a prized pick in the 2014 NBA draft; at least if he ends up being a one and done, as expected. Parker is 6’8″ 235 pound and is athletic enough to play the 4-spot, but will likely thrive as a small forward at the next level. Woj said he doesn’t think there is anyone more versatile than Parker and added he can be positioned all over the floor…”can play in the post…facing the basket.”

Joining Parker and Hood in the frontcourt will be Josh Hariston, Amile Jefferson, Alex Murphy and the youngest Plumlee, Marshall. It’s not a very big frontcourt, but its speed could give some of the slower teams a lot of problems.

Quinn Cook will run the show for the Blue Devils, but expect Parker and Hood to do a lot of playmaking in half court sets. Freshman Matt Jones and Semi Ojeleye are also going to be debuting for Duke, and the overall talent level is high as usual. The Cameron Crazies will be back at it once again, with a team quite different than last year’s, but a threat to win the NCAA title once again.

Tired of being beat by the bookies?  Check out Maddux Sports’ paid pick plans for the 2013-14 NCAA basketball season!