Posted on August 13, 2012 by Brett David Roberts in College Football,Headlines 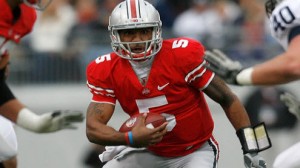 Urban Meyer has brought in a new offensive coordinator in Tom Herman. Herman will look to utilize an offense stressing more versatility than last season, when the Buckeyes rarely put the ball in the air, ranking 12th in the Big 10 in passing, with only 127.0 yards per game.

It will be up to QB Braxton Miller to make this happen. Miller led the team in both passing and rushing last season after he took the QB job from Joe Bauserman, and his potential is still very high. His backup Kenny Guiton should prove suitable, as well, as they have similar games and that will enable the Buckeyes to keep their receivers comfortable and their offense structured the same, regardless of which QB is in the game.

Running the ball should prove to be a strength for OSU as well. Junior Carlos Hyde will be the primary ball carrier but should receive plenty of help from Rod Smith and true freshman Bri’onte Dunn. Jordan Hall will also dual as a wide out, because of his exceptional ability to run short pass routes and make big plays.

Between Hall’s ability and possible First Team All Offense candidate Jake Stoneburner, the Buckeyes should be a much improved team in the pass game. After all, it’s hard to get much worse than last year’s performance passing the ball, which ranked among the worst in the nation. WR Philly Brown is starting to look a little more developed and freshman Mike Thomas had an impressive spring showing. WR Devin Smith could be a big player as well, because he has big play capabilities, but he will need some seasoning this year before he becomes anything close to a primary option for Miller.

The OL should be pretty solid this year…Jack Mewhort will man the LT position and Corey Linsley will be snapping the ball at center, while Andrew Norwell could eventually be a very good guard. Norwell and Mewhart are both expected to be candidates for the All Big 10 First or Second offensive team, so that should provide ample pass protection for Miller to do his thing, as well as providing good blocking for Hyde when he cuts through the interior.

Defensive coordinator Luke Fickell has always focused on preventing the run, and though OSU (sort of) struggled with that last year (50th in the nation allowing 141.5), due to slower linebackers and back end defense, those issues have been handled and the DL is one of the best in the nation, so that will likely off-set any possible deficiencies.

DE John Simon and DT Jonathan Hankins both could be All-Americans this season and they are joined by a lot more talent up front. DE Nathan Williams should have a huge year if he can manage to come back from a rather bad knee injury he suffered. Moreover, the Buckeyes had a top 10 signing class and a few of them were DLs, including Noah Spence and Adolphus Washington. Both should have impact from day one.

Etinne Sabino will be the key for the linebackers and they also have Ryan Shazier, whose athletic ability will always make him a standout. They return five players from their secondary, including great cornerbacks in Bradley Roby and Travis Howard.

It all comes together to spell what should be not just a good defense, but a great one. Their mediocrity last year will be quickly forgotten.

Drew Basil will be handling placements and Ben Buchanan will be entering his third season as the punter. Basil also nailed 16 of 19 field goals last year, missing not one from within 40 yards. So as usual, their kicking will be top notch.

Hall will be the return man and OSU is stacked with great athletes for coverage units, so their special teams should be just that, special.

It’s a pity that the Buckeyes can’t contend for a BCS championship, because they would be. Still, an impressive year will only help the program return to greatness and with eight home games, they’ll be able to rally the fans behind a program that is on the rise again. The best part, of course, will be on November 24th when the Wolverines roll into town for what promises to be an epic showdown.