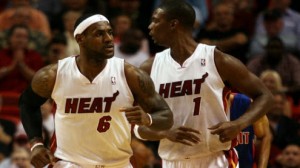 Training camps have begun and tip-off is less than a month away, so it’s time to preview the upcoming NBA season. With all the movement in the offseason it is likely that some new teams will rise to the tops of their divisions. Let’s take a look at the Southeast Division. – All odds according to Pinnacle Sportsbook, although other places like Bodog offer online NBA betting on these props as well.

Miami Heat (-156 to win Eastern Conference, +154 to win NBA title) Last year: 47-35, 3rd in division- It’s championship or fail for the Heat. We’ve never seen a team quite like this so it’s difficult to know what to expect. LeBron James carried his team to 60 wins last year and now he has Dwayne Wade and Chris Bosh. Will this team win 65 games? Can it get to 70? Only time will tell. But with three of league’s best players, it’s no surprise that this team is the favorite to win it all. The signing of sharpshooter Mike Miller could prove to be the key as Wade and James will be able to create him open looks . This team does have some weakness, especially down low, which will be a problem against teams like Boston and Orlando come playoff time. Since expectations are so high, the value isn’t great, but they are still worth the bet.- Prediction: 66-16, 1st in division.

Orlando Magic (+499 to win Eastern Conference, +1230 to win NBA title) Last Year: 59-23, 1st in division– The Magic look to bounce back after a disappointing series against the Celtics. Orlando lost Matt Barnes, but found a more than capable replacement in Quentin Richardson. The team’s success depends on Dwight Howard’s development. Howard is the reigning two-time Defensive Player of the Year, but still needs to improve on the offensive side of the ball. If he can create on his own, open looks will emerge for his teammates. Vince Carter was very inconsistent last season and needs to be better this season. This is one of the league’s deepest teams, with quality players in J.J. Redick , Marcin Gortat, and Mickael Pietrus likely to come off the bench.  The Magic match up well against the Heat with their size, but struggle against the Celtics. The Magic offer pretty good value, and don’t be surprised if they sneak back into the Finals. Though this is an elite team, they tend to off-games and won’t be able to keep up with the Heat in the division. Prediction: 58-24, 2nd in division.

Atlanta Hawks (+2608 to win Eastern Conference, +6072 to win NBA title) Last Year: 53-29, 2nd in division- The Hawks didn’t get any better this off season, but they didn’t get any worse. In fear of losing their best player, the Hawks re-signed Joe Johnson to the summer’s biggest contract. This is a quality team that has a lot to prove after being embarrassed by the Magic in the playoffs. It’s starting to look like Atlanta has hit its ceiling. The Hawks have a solid core in Johnson, Josh Smith, and Al Horford, but can’t get past the second round. Horford was good last year and this could be the year he evolves into an elite center. Still, this team is the same as last year and the division and conference got a whole lot tougher. They do offer great value, but will probably need to make some sort of acquisition in order to take the next step. Prediction: 48-34, 3rd in division.

Washington Wizards (+5734 to win Eastern Conference, +11713 to win NBA title)  Last year:26-56, 5th in division– John Wall will make an immediate impact and help this team try and get back to relevance. With Gilbert Arenas and Wall in the backcourt, the Wizards can be a dangerous team. Andray Blatche took over in the second half of the year and expect him to be a consistent force all season. The Wizards are back on the rise, and could sneak into the playoffs, but are still a few seasons away from being a legitimate threat. Prediction: 38-46, 4th in division.

Charlotte Bobcats (+6255 to win Eastern Conference, +15969 to win NBA title) Last Year: 44-38, 4th in division- The Bobcats surprised a lot of people when they snuck into the playoffs last season. Stephen Jackson and Gerald Wallace are two very good players and Tyrus Thomas has shown improvement, but this team lacks depth. With Raymond Felton and Tyson Chandler gone, the Bobcats will need some young players to step up. Expect the Bobcats to take a step back this year. Prediction: 35-47, 5th in division.

Overall- This is the best division in the Eastern Conference, with three or four teams likely to make the playoffs. The Heat and the Magic are title contenders and worth betting, while the Hawks could be a nice long shot.

Remember that you can get winning NBA picks from the best basketball handicappers out there.  Also our NBA odds page will feature live point spreads on all the NBA betting action the entire season, a must have tool for NBA bettors this season.