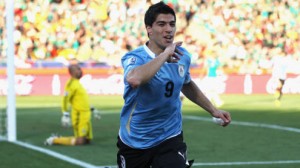 Joachim Loew’s young German team was outmatched in its semifinal against Spain. They fought hard on defense, but someone left Carles Puyol completely unmarked on his header that sent Spain to its first ever World Cup final.

Uruguay was outmatched just as much – if not more – against a strong Dutch team, but had a chance to tie the game in a frantic final stretch. Giovanni Van Bronckhorst opened the scoring with an absolute laser from 30 yards out.

Uruguay’s star striker Diego Forlan got his team back in the game with a shot that was just as good. He hammered the ball into the net from just under 30 yards, and tied the game just before halftime.

Wesley Sneijder and Arjen Robben seemed to put the game out of reach with two goals within three minutes, but Uruguay’s Maxi Pereira revived the hopes of the last South African side in the tournament when he scored in the 90th minute. Uruguay tried to tie the game and got close, but it was too late.

Both Uruguay and Germany missed important players in the semifinals due to suspensions. Uruguay’s Luis Suarez, the team’s other dangerous striker, and Germany’s co-top-scorer Thomas Mueller will be back for Saturday’s match.

Both sides could have used the players in the semis. Mueller’s replacement, Piotr Trochowski isn’t nearly as creative and doesn’t play direct, fast passes like Mueller does. This slowed down the German counterattack noticeably.

When Toni Kroos came into the match for Trochowski, the side was able to pick up the pace a little bit, but neither of the two can compare to up-and-coming Mueller. The 20-year-old will be back for the match against Uruguay, and the German side will benefit greatly from that.

With Suarez out, Uruguay’s only real weapon on offense was Forlan, and while the striker scored, the counterattack wasn’t nearly as dangerous as it can be with both attackers playing.

When both Suarez and Forlan are on the field, the speedy wings can play passes form both sides of the pitch that start dangerous attack. Suarez will be back against Germany, but Forlan is battling a right thigh injury that could keep him out of the match or limit him.

So far, both teams have been best when counterattacking. One of the sides will have to control the game, and Germany will most likely take over. They have enough speed and a strong enough defense to keep up with the Uruguayan counterattack.

Germany goes into the match as the favorites, and I think rightfully so. While Uruguay is dangerous on the attack, the Dutch just gave the Germans the blueprint for beating the Uruguayan defense. And the Germans have the talent and speed to play the way the Netherlands played in the semifinals.

German striker Miroslav Klose has 14 goals in his World Cup career, only one less than Brazilian Ronaldo. He will look to score twice to take the all time lead in scoring at the World Cup. Klose is having back problems after being injured in the semifinal, and might have to sit out the third-place playoff.

If Klose is ready to go, expect his team­mates to cater to him and try to get him the ball as much as possible. He is most dangerous in the penalty box, so teammates Mesut Oezil and Lukas Podolski will try to find the attacker in close range to the goal.

I expect a very offensive strategy by the Germans in a game that just doesn’t matter as much as the final. While it is nice to finish third in the World Cup, I think the Germans will try to open up their game and just play for as many goals as possible.

I can’t say the same for the Uruguayan side, because I haven’t seen them play that kind of style yet. All I’ve see from them is counterattacking from a strong defense, and I’m not sure they can control a game and play all out for 90 minutes.

I think Germany will win this one in regulation and Klose – if ready to play – will get at least one goal. If you are with me, go to Pinnacle (-121) or 5Dimes (-123) for the best lines! If you want to play it a little safer and pick Germany to finish in third place, no matter if they need overtime or penalties, go to 5Dimes for a -257 line.