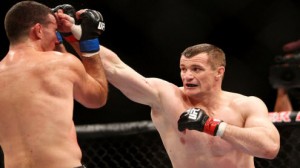 Sunday August 14th, 2011
UFC Live 5 at Bradley Center, Milwaukee, WI
The UFC Live 5 Will kick off Sunday night in Milwaukee and this piece will preview the matches in the first two hours of the event.  There are a number of good fights in the lighter weight divisions that offer a lot of value betting wise, and we’ll take a look at some of them here.

The 27 year old Edwin “El Feroz” Figueroa trains out of McKinney Texas.  He is 5’7 and has a 69″ reach, and boasts a 7-1 record, though he has lost his only UFC match.  Five of his wins have been by technical knockout, and he has two wins on submission moves.  The sole loss was by decision.  In his last five fights he is 4-1 and beat Johnny Bedford and Warren Stewart, both by technical knockout.  For Figueroa to stick in the UFC, he is going to have to win, as he is favored to do, since Reinhardt is over the hill as fighters go, and Figueroa should be in top shape.

Reinhardt is only one inch shorter than Figueroa, but his reach is 5″ shorter and he is old (41).  He has been outstanding over his career, with a 20-2 record, but he is 0-2 in UFC.  17 of his 20 wins (85%) have been by submission moves with 3 wins by TKO.  His two losses were both by submission.  In his last five fights he is 3-2, a true sign of his fall off, though he did beat Theodore Reynol and Del Hawkins.  He lost to Tiequan Zhang and Joe Lauzon though (both by submission).  Much like Figueroa, his UFC future depends on a win tonight.  He has only fought against sub-par fighters and this would be his third straight loss in UFC, only further suggesting it is time for him to hang it up.

Hettes is a young gun, only 24, and at 5’9″ he stands the same height as his opponent.  He has an undefeated 8-0 record and this will be his first UFC fight.  He has beat several formidable opponents, most notably Jacob Kirwan, George Sheppard, Dwyane Shelton, James “Binky” Jones, and Jay Haas.  All five wins came via submission moves, as well.  Hettes is making this debut as a late replacement for Leonard Garcia, but regardless of whether he wins or loses tonight, this will not be his first and last UFC fight.

Caceres, like Hettes, is young (23).  His record is far less impressive though, at 5-3, and he lost his UFC Debut.  Three of his wins have come by submission and 2 by Technical Knockout.  All three of his losses were by submission.  He has struggled recently, losing 3 of his last 5 fights, but he did beat Jahmal McLennan and Tulio Quintanilla.  That was offset by losses to Matt McCook and Farkhad Sharipov.  If he loses tonight, he might never show back up on the UFC circuit, but two straight losses to start his UFC career won’t bode well for his chances of staying in the elite circuit.

Danny Castillo may stand only 5’9″, but he has a 71″ reach and at age 31, he has put together a nice run for himself so far, with an 11-3 record, and a perfect 1-0 in UFC fights.  Four of his wins have been by TKO, 4 by submission, and 3 by decision.  Two of his three losses have come by submission with the other being a knockout.  In his last 10 fights he is 7-3, with big victories over Joe Stevenson, Will Kerr, Dustin Poirier, Ricardo Lamas, Phil Cardella, and Rafael Dias.  His three losses over that span came to Anthony Pettis, Shane Roller, and Donald Cerrone.  A loss tonight could prove quite harmful with the strong competition in the 155 pound weight group, and Castillo is an unknown fighter who came after the WEC merger.  In WEC fighting he was 5-3.

Like Castillo, Volkmann has a similar long stature, with a 71.5″ reach.  He is 30, in his prime, and boasts a 12-2 record, with three victories in his five UFC matches.  Six of his wins have come by submission and 5 by decision.  One loss came by submission and the other by decision, and he is 3-2 over his last 5 fights.  He has beaten Antonio McKee and Paul Kelly, but lost to Martin Kampmann and Paulo Thiago.  A loss tonight would not bode well for hs chances at all of staying in UFC.  He is an idiot at least.   He challenged Obama to a fight and got a lot of publicity for it, but he didn’t seem to know people were laughing at him, not with him.

Karlos “The Terminator” Vemola is associated with the London Shootfighters.  Like his opponent, he is over six-feet all and is 26 years old, hailing from the Czech Republic.  His 8-1 record is impressive, but he is only 1-1 in UFC fights, with the one loss having come by decision.  He has beaten Seth Petruzeilli and Stav Economou but lost to Jon Madson at UFC 116.  A loss tonight might not put him out of the UFC, but it would inch him closer to it.  He is favored to win, however, and his strength could prove to be the reason why.

Markes is 23 and resides in Brazil.  He is 11-1 and this will be his UFC debut.  Five of his wins have come by TKO, four by submission, and two by decision.  His lone loss to Paulo Henrique Garcia Rodrigues was by submission.  He has beaten Paulo Filho, Wendros Carlos De Silva, Charles Andrade, and Michael Knapp.  Regardless of whether he wins tonight or not, he’ll be back in UFC action, especially since he was a late replacement in this fight.

This middleweight bout (185 pound weight class) should prove to be a main attraction.  Dollaway is associated with the Power MMA Team, and at 6’2″ with a 76″ reach, he will match up well against the 6’3″ Hamman.  Dollaway is 11-3 and 5-3 in UFC.  Two of his three losses have come by submission and the other was a knockout.  In his last five fights he is 3-2 and in his last ten he is 7-3.  He has beaten a host of good fighters, including Jay Silva, Joe Bunch, and Goran Reljic.  His notable losses include Mark Munoz and Amir Sadollah in the UFC 7 Finale.  Still, a loss tonight could spell trouble for Dollaway.  Munoz was not a good loss and with two straight losses his future as a UFC fighter could be in jeopardy given the fact that UFCs middle weight division has become so tough.

Jared Hamman is 6’3″ with a 75″ reach.  At age 29, he is 12-3 overall.  However, he is only 1-2 in UFC, a league with a short attention span, so a third loss would really spell trouble.  Nine of his thirteen wins have come by TKO, so it’s not like he is really ending fights with authority in anyway whatsoever.  Losses to Kyle Kingsbury and Poai Suganama at the Elite XC, have only further illustrated the fact that his UFC game must be tuned up significantly.  He has moved down from light heavyweight for this fight as a last ditch effort to save his career.