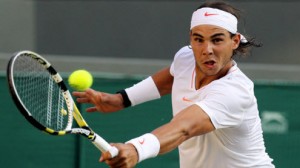 Rafael Nadal kept his cool playing against Andy Murray and 15,000 fans cheering for the Brit on Wimbledon’s Centre Court Friday. There were many more Brits hoping for Murray to advance watching the match on a big screen on Henman Hill.

END_OF_DOCUMENT_TOKEN_TO_BE_REPLACED Tomas Berdych beat Roger Federer and eliminated the Swiss in the quarterfinals. Federer had made the final every year since 2003, and won the tournament six out of the last seven times. He lost to Rafael Nadal in the 2008 finals

END_OF_DOCUMENT_TOKEN_TO_BE_REPLACED 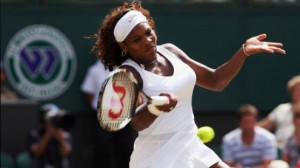 After a couple of stunning upsets, there are two unseeded players and a #21 seed in the women’s semifinals. Venus Williams lost a shocker to 82nd-ranked Tsvetana Pironkonva in the quarterfinals. Williams had reached the final eight of the past ten years and has won the tournament five times.

END_OF_DOCUMENT_TOKEN_TO_BE_REPLACED

Wimbledon equals Williams on the women’s side. One of the Williams sisters has won in each of the last three years and in four of the last five tournaments in London. The sisters faced off in the final in 2008 and 2009, with each of them winning one title. The two make an appearance in the doubles tournament together as well.

END_OF_DOCUMENT_TOKEN_TO_BE_REPLACED

Roger Federer enters this year’s tournament with a chance at tying Pete Sampras’ record seven Wimbledon titles. The Swiss is one of the top players – if not the best – on grass court, and is favored to win this year.

END_OF_DOCUMENT_TOKEN_TO_BE_REPLACED

June and July are the best months to be a tennis betting fan. The two glorious weeks of the French Open are barely over when Wimbledon, the world’s greatest tennis tournament, gets underway. Tennis is never better than during a Grand Slam tournament, and Wimbledon, which starts on Monday, promises to be a great tournament. The top storylines are obvious on both sides – it’s the Nadal-Federer show as always for the men, and the Williams sisters are the biggest story among the women. What’s more interesting to look at, though, are the players that aren’t quite in the public consciousness to the same extent who might be poised to make a breakthrough and do some damage. The French Open gave us a great reminder of the importance of looking beyond the headlines in the big tournaments – neither women’s winner Francesca Schiavone nor runner-up Samantha Stosur were anywhere close to obvious. Here’s a look at three men and three women who are worth a look (odds, when available, are from Bodog):

END_OF_DOCUMENT_TOKEN_TO_BE_REPLACED

Let me say right from the start that I am a big Roger Federer fan. I think that he’s the best, most dominant athlete of his generation. In any sport. As much attention as he has received over the years, I think he’s still been under-appreciated. Because of that I am predisposed to think that the current arguments that Federer is washed up and vulnerable at Wimbledon are ridiculous. Even if it weren’t for that bias, though, I would struggle to find a lot of logic in the arguments that Federer shouldn’t be considered the heavy favorite when Wimbledon kicks off on Monday. Here’s a look at the major arguments that people are making against Federer, and why I am just not buying them.