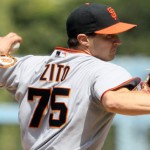 San Francisco lost its seventh straight game in dropping a 6-3 contest to the Colorado Rockies at Coors Field.  The offense is much to blame during the streak, failing to score more than three runs in any contest over that span.  The Giants have now lost nine of their last 10 games and 11 of their previous 14.  Facing division foes will not make turning things around any easier, with the team going 8-19 against the NL West division this season (-1,500).  That mark gets even worse with the team being 2-10 on the road against divisional opponents.  The team has produced a dismal 3-7 record in games after three or more consecutive losses (-460).