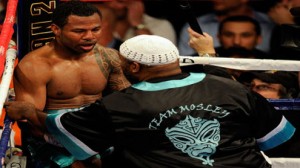 Two fighters looking to get their careers back on the right track will meet up this weekend when “Sugar” Shane Mosley takes on “The Latin Snake” Sergio Mora. The scheduled 12-round bout will take place this Saturday night at the Staples Center in Los Angeles, CA. With both boxers essentially fighting for their careers, they should both should enter the fight with a heightened sense of urgency. This should make for a great bout between two supremely skilled fighters.

After an impressive victory over Antonio Margarito in January 2009 to become the WBA welterweight champion, Mosley seemed to have once again become one of boxing’s elite fighters. However, in his very next fight this past May, he was thoroughly dominated by Floyd Mayweather. Now, at the age of 39, Mosley finds himself at a very precarious point in his career. The most common topic of discussion about Sugar Shane is regarding whether or not he still has anything left. The fight this coming Saturday is being viewed by many as the time and place for this question to be answered. On talent alone, Mosley is the clear favorite going into this fight. However, there still remain questions regarding what exactly happened to Mosley in the Mayweather fight. After completely dominating the first few rounds and nearly knocking Mayweather out, Mosley seemed like a completely different fighter the rest of the way, getting completely dominated. He seemed slow and winded the entire fight, and seemed completely uncomfortable. This was seen by some as evidence that Mosley has simply gotten too old and can no longer keep up with the elite fighters.

Meeting Mosley in the ring will be Sergio Mora, the enigmatic winner of the first season of the television show “The Contender”. After winning that tournament back in 2005, Mora has been virtually a non-entity in the boxing world. During the 5 years since his appearance on the show which was supposed to launch his career, Mora has gone through a 14-month and a 19-month layoff, and has been involved in a match of any real significance only twice, both against the late Vernon Forrest, back in 2008. He has fought only once since then. However, this lack of in-ring time seems to be more the fault of bad management and not Mora himself. After declining fights against Jermain Taylor and Kelly Pavlik in recent years, Mora is finally stepping back into the ring against a respected and recognizable opponent. At the age of 29, Mora is in the prime of his career and this could be a make-or-break fight for him. If he loses, he could be relegated back to anonymity for the remainder of his career. If he wins, he will have a legitimate win on his record that he could parlay into bigger and better-paying future bouts.

For Mosley to win the fight, he will need to get on the inside and use his superior power to wear down Mora. This will also help Mosley counter one of Mora’s strengths, which is to jab and move, allowing him to build up the points. Keeping the fight at close range will also allow Mosley to take advantage of his speed, which combined with his power, could do serious damage and possibly end the fight early. Always a supremely fit fighter, his sudden inability to keep up with Mayweather seemed like an aberration. However, with Mora always in peak condition, Mosley will need to be read to chase Mora around the ring.

Mora has limitations, but he is aware of them and knows how to work with and around them. He is an extremely quick, gritty, and intelligent fighter with a great jab and great movement, but his power is almost non-existent. Mora’s best strategy for this fight will be to extend it and slowly wear Mosley down as the fight goes on. If he continues to move and continues to chip away, he could possibly wear Mosley down enough late in the fight to go for a knockout, or more likely, win via the score cards.

Although this fight could go either way, Mosley is the favorite and therefore not offering enough value. Although still relatively unknown, Mora is a legitimate contender and definitely can win this fight and is getting good value. This fight could signal a changing of the guard in the division. Bettors should take Mora in this one, who is getting good value at +210 at Bookmaker.