The new-look Astros look to win the second game of this series against NL Central rivals at Minute Maid Park. 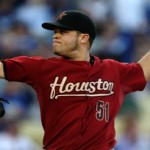 Houston is clearly in a rebuilding process after trading away franchise pieces Lance Berkman and Roy Oswalt this week.  The Astros own a 26-20 record versus the NL Central this season (+1,370) and they are currently in the midst of 27 straight games against divisional foes.  The club is 100-102 against the division the last three years (+1,140) with the total being 75-116 O/U in that span.  After posting a 17-34 mark through May 31st, the Astros are 26-25 since June 1.  With a victory in tonight’s contest, Houston can finish the month with a winning record (12-11, +320).  The team is 4-3 against the Brewers this season and 51-28 when hosting them at Minute Maid Park.

Bettors must acknowledge that the Brewers have lost their last four road games versus left-handed starters and are 14-19 against southpaws this season overall (-660).  That hasn’t always been the case, with Milwaukee being 68-58 against lefties the last three seasons (+240).  After shutting out their opponent, the Astros have dropped all four games this season and the total is 2-2 O/U in those contests.