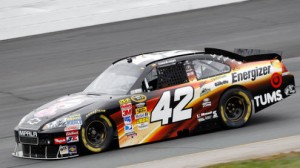 The Chase for the Cup starts up this Sunday at the New Hampshire Motor Speedway in Loudon, New Hampshire, with the Sylvania 300. The 317-mile race is set to start at 1:15 PM ET. This race will be especially interesting. Because this is one of the final 10 races of the season, a lot of bettors will only focus on the 12 drivers involved in the Chase for the Cup. Those 12 drivers are the favorites, which translates in betting terms as not offering great value. Instead, we will take a look at some of the racers offering better value in the race and give out our top picks.

A.J. Almendinger – Bodog odds to win: 50/1 – One of the true dark horses heading into Sunday’s race, there may be no racer offering better value this weekend than Almendinger. Although he finished outside of the Chase for the Cup, he has been racing especially well recently. His performances on the New Hampshire track have progressively gotten consistently better. The combination of the him finding his rhythm along with the race being on a track he seems to now be very comfortable on give him a real chance to win this weekend. And, at 50/1, every bettor should take a serious look at Almendinger in this one.

Juan Pablo Montoya – Bodog odds to win: 20/1 – Montoya has consistently put together great runs on the New Hampshire track, but for one reason or another has never been able to win there. Despite leading in last September’s race for 105 of the 300 laps, he still finished third. He was again a favorite on the track this past summer, but finished 34th after a wreck. He runs great on this track, but has never been able to quite finish it off. This may be the race he finally does.

David Reutimann – Bodog odds to win: 30/1 – Thanks to Sunday’s race being held at the New Hampshire Motor Speedway, Reutimann becomes one of the drivers offering the best value this weekend. This is one of his favorite tracks, and the results prove, with his finishing in the top-20 the last 5 times he has raced there. Reutimann has finished as high as 4th during that span, and as his comfort level on the track grows, so do his chances of winning. 30/1 offers great value, especially at a track he is so comfortable on.

Kasey Kahne – Bodog odds to win: 25/1 – Kahne is an interesting driver in this race. Always a consistent driver, he has not had great results in New Hampshire in his last 2 races. The odd thing is that the results have been bad not because of poor racing, but because he has not finished either race due to engine problems. When he has been able to finish the race, he has done relatively. In fact, over 13 starts, he has 5 top-10 finishes and 1 top-5 finish. He and his crew should have figured out by now what has caused them problems over the last two races. With the car ready to go, Kahne has a legitimate shot at winning this Sunday.