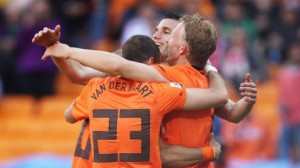 The Netherlands shocked five-time champion Brazil and rallied from a 1-0 deficit to advance to the semifinals. Brazil cracked open the Dutch defense early in the game and took the lead only ten minutes into the contest.

The Oranje, however, stuck with their game plan and put pressure on the Brazilian defense. Wesley Sneijder’s cross led to the game tying goal thanks to a breakdown of communication in Brazil’s defense.

Keeper Julio Cesar tried to punch the ball away but missed. The ball bounced off Brazilian Felipe Melo’s head and into his own goal. The Dutch took the lead on a Sneijder header and Brazil completely fell apart. Melo got a red card for stomping on Arjen Robben’s leg in the 73rd minute and made a comeback almost impossible.

Uruguay beat the last Ghana, the last African team in the tournament, in dramatic fashion. The match went into extra time after Sulley Muntari had put the Ghanaian side in front in stoppage time of the first half and Diego Forlan had tied the game in the 55th minute.

In the final seconds of the scoreless overtime, Uruguayan striker Luis Suarez used his arm to block Dominic Adiyiah’s header on the goal line and saved a goal. He was sent off for the handball and Ghana was awarded a penalty kick.

Asamoah Gyan, who had scored two goals on penalty kicks earlier in the tournament, decided to take this one as well. He hit the crossbar, and the match went into a penalty shootout, which Uruguay won 4-2.

The Netherlands goes into the semifinal matchup with Uruguay as the heavy favorite, especially considering La Celeste will miss one of their most dangerous striker’s in Suarez due to the red card on the handball.

Uruguay as relied on Suarez and fellow striker Forlan all tournament to score on their dangerous counter attacks. Their personnel and talent doesn’t allow them to play any other style, and they will be missing Suarez sorely.

The Netherlands have looked in control in all of their matches so far and they are a serious contender to win it all. They didn’t lose their cool even when they went down to powerhouse Brazil and stuck with their game plan.

They will have to show the same persistence against Uruguay who will keep playing their counter attacking style. I don’t think La Celeste will be able to score without Suarez, since the Dutch defense can focus entirely on Forlan.

The Netherlands showed their offensive firepower against a strong Brazilian defense, and proved that they are very dangerous on set pieces. They have several players that can score and the Uruguayan defense will be outmatched against the Dutch strikers.

The Dutch are the heavy favorites going into the match and I can’t see anything but a Holland victory. If you think the Dutch can win in regulation, go to 5Dimes or Pinnacle for a -144 line.

5Dimes also offers a line for the Netherlands to advance no matter I they win in 90 minutes or after extra time or penalties. If you want to make your bet a little safer for less reward, pick Holland to advance at -280.