Posted on August 21, 2010 by Ken Langston in Headlines,Soccer 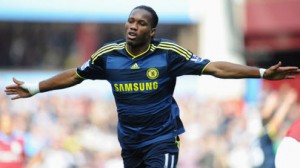 Week 2 of the EPL gets underway on Saturday with a slate of good games.  We will focus on 3 games and give a handful of free English Premier League picks between those 3 contests.

Arsenal hosts Blackpool at Emirates Stadium on Saturday at 10 AM EST. Blackpool currently sits in 2nd place in the standings with 3 points, while Arsenal is in 9th place with 1 point.

Arsenal is coming off of an opening match 1-1 draw with Liverpool, a game they feel they should have won. Even after dominating much of the match, the Gunners still found themselves down 1-0 late, and would have lost the game if not for a lucky bounce. Arsenal’s biggest problem throughout the match was their inability to finish. This should change this coming weekend, as they will have had a week to review their performance and make adjustments. It will also help that they are playing Blackpool, a willing but clearly overmatched side.

Blackpool opened up their season with a completely unexpected 4-0 victory over Wigan Athletic FC. Blackpool’s win over Wigan marked their first ever appearance in the EPL. For betters, this is fool’s gold. Blackpool barely made it to the Premiership, having won the Football Championship League (English Second Division) in a playoff after having finished only sixth during the season. Their stunning victory this past weekend can be attributed more to special circumstances, like this being their first Premiership match ever and Wigan being by far one of the weaker teams in the Premiership, than Blackpool being a legitimate contender. This will be clear on Saturday as Blackpool face Arsenal.

Betting on a Blackpool win or draw is too much of a reach. The best options will be on margin of victory and total goals. The best bet is Arsenal at -2, found on both Bodog and Bookmaker. Bookmaker offers an extra ½ goal on the total. The best bet on this is the goal total for the game at under 3½.

Everton hosts Wolverhampton at Goodison Park on Saturday at 10 AM EST. Everton is currently in 15th place with 0 points. The Wanderers are in 5th place with 3 points.

Everton will be looking to recover from a 1-0 loss to open their season. An uncharacteristic error from starting keeper Tim Howard caused Everton both the game and 1 point in what should have ended as a 0-0 draw. Expect an inspired performance by the American Howard, regarded as one of the world’s top keepers. Although Everton is not especially strong up front, they do have enough to be a threat against a team like Wolverhampton. Their defense should also have enough to hold against the Wanderers, especially with a stronger effort from Howard.

Betters should not be fooled by Wolverhampton’s current position in the standings, especially after only 1 match. They did manage a 2-1 victory, although it came against Stoke City, a team that will at best finish this season somewhere in the middle of the pack. They will receive a tougher challenge this week from Everton, who should finish the season in the top-10 of the Premiership.

Odds on this match offer great value for betters. Most of the odds seem to be heavily based on last week’s results, which will probably prove to be inaccurate in the long run. Even though Bodog and Bookmaker have favored at +1. Everton is in fact probably the better side. The best bets are in fact in favor of Everton at -1. The draw is also a solid bet. Bodog has the draw at +310, while Sportsbook has it at +275. The over/under at 2½ is a close call. For those looking to play it, the best bet would be the under with neither offense being particularly strong.

Even after a stunningly bad loss to Blackpool to open the season, Wigan can in fact find itself in an even worse position this weekend as the face Chelsea. All that Wigan can really hope for in the match is to keep the results somewhat respectable against one of the top sides not only in England, but in all of Europe as well.

Chelsea will be looking to continue their success after a 6-0 victory to open the season. They will face little resistance this week when they face Wigan. Although it is unreasonable to expect another 6-goal output from Chelsea, the final outcome of this game will be along the same lines. Expect a dominant performance and a comfortable win for Chelsea.

Both Bodog and Bookmaker have surprisingly timid odds for this one. Even though another 6-0 Chelsea victory is not expected, they should still win comfortable, and a bet on a Wigan victory or draw is too much of a long shot. Bodog and Bookmaker have Chelsea at -1½ with the over/under at 3. Definitely take Chelsea at -1½. The over/under looks more like a push, though for those looking to bet, the over is a real possibility. Bodog has the over EVEN, while Bookmaker has it at -110.