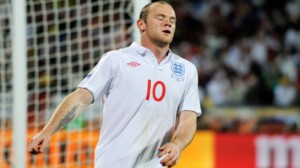 South Korea gave Uruguay a tough fight, but the South Americans prevailed in the end. Luis Suarez continued his great run at the World Cup and scored twice to give Uruguay the win. He scored an amazing goal in the 80th minute to put the Uruguayan side up 2-1. Uruguay’s strong defense gave up its first goal, but prevented any further damage.

The US team’s run at the World Cup is over. They fell victim to early goals again. After making up an early 1-0 deficit in a strong second half, they allowed Ghana to score early in extra time. They didn’t have enough time to make up for the difference. They played a great cup, but need to come out of the gates stronger.

Germany and England start out the day at Free State Stadium in Bloemfontein. Kickoff is at 10:00am ET. This will be the sides’ fifth meeting at a World Cup, and the first four have all gone in to extra time or even penalties.

England beat Germany in extra time in the 1966 final to win their home World Cup. This also was the last time the English have won a World Cup. The match went into extra time with the score 2-2 after 90 minutes. Geoff Hurst gave England the 3-2 lead with his so-called “Ghost Goal”. Germans refer to the goal as “Wembley-Tor” (“Wembley-Goal”) in reference to Wembley Stadium, where the match was played.

Hurst’s shot hit the crossbar and bounced down either on the line or slightly over the goal line. There has been discussion for decades whether the ball actually crossed the line or not, but Swiss referee – after a short discussion with Soviet assistant Tofiq Bahramov – called it a goal. Recent digitally-enhanced footage seems to show that the ball did not cross the line.

Germany won the meeting at the 1970 tournament after rallying from a 2-0 deficit. The teams drew 0-0 in 1982 and Germany won a penalty shootout in the 1990 semifinals.

Germany looked great in their opener against Australia, but hasn’t been able to repeat the performance. They will get striker Miroslav Klose back, who missed the sides match against Ghana due to the one game suspension that came with the red card he got in Germany’s loss to Serbia. Germany need to step it up if they want to beat England Sunday.

England’s tournament has a different look. They started out really slow and had to win their final match to advance from Group C. They looked sloppy against the US and couldn’t score against the Desert Foxes. They picked up the pace against Slovenia and looked a lot more in control.

Wayne Rooney has been extremely quiet, and has looked out of place at times. The striker usually is one of the most dangerous attackers in the world, but hasn’t even come close to scoring at this World Cup. He needs to get his head in the game and work for his chances, not just wait for the ball to come to him.

This is a tough one to handicap, as both teams have more potential than they have shown, and it will come down to who has the better day and can actually live up to the expectations. This should be awesome to watch, though. If you think the streak of draws after 90  minutes in World Cup meetings between the sides will continue, go to Bodog for a +220 line.

Argentina and Mexico face off in Sunday’s second match. Argentina goes into the Round of 16 with a perfect record. While Lionel Messi has yet to score, he has created space and chances for his teammates and has helped the side advance with three victories.

Coach Diego Maradona might be the only reason to go against Argentina, as his actions are unpredictable at times, and it is unclear how he would react should his team fall behind early. I don’t really see this happening, as Mexico are not having a good tournament.

El Tri can play a lot better than what they have shown so far, but there is no reason to think that they can flip the switch against a dominant side like Argentina. The Mexicans don’t seem to be able to reach their potential, and they are the inferior team even if they do.

Argentina should win this one in regulation, and they will probably outclass the Mexicans. Go to Pinnacle (-172) or Bookmaker (-182) for the best lines.