Posted on September 24, 2014 by Brett David Roberts in Golf,Headlines 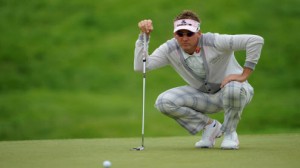 It’s time for the favorite golf event of many, the 2014 Ryder cup. The Americans are once again underdogs for the event, which will take place in Scotland. For Europe to retain the crown, it needs just 14 of 28 available points. Europe has won seven of the last nine, and it stands to reason that the Euros prevail once again.

First off, an interesting note is that Tiger Woods will not be competing. This does, however, give the U.S. a better chance since Woods has been injured. Woods has only been a part of a winning Ryder cup team once in seven tries (1999), and that was a decade and a half ago. Tom Watson said he felt Woods brought an “element of intimidation,” but that essentially means very little. The world knows he is injured and a shadow of the player he once was, so the U.S. will move forward without the once-dominant superstar of golf.

It’s not likely Woods would make the putters of Rory McIlroy, Ian Poulter or any others jitter on the greens. While Woods is a name-draw, that is all he is at this point, in blunt honestly. Tiger’s ex-coach Butch Harmon said simply “He’s not the Tiger Woods we remember.” Resigning to that fact and moving on…

Tom Watson is an experienced captain and he should be able to help tame Bubba Watson and Patrick Reed, who can tend to lose their composure. Watson is not a rallying kind of leader, but that may make little of a difference.

Ian Poulter could be the big difference maker for the Euros. He’s been one of the best Ryder Cup players of all-time, but he has struggled lately. Something seems to indicate that the setting of this stage will bring out the best in Poulter, though. The Europeans have a lot of talent on paper, but it is not going to be a cakewalk for them even so. Rory McIlroy even has been subject to failing under pressure, so the Americans can’t simply be written off.

The Americans will need a strong Day One. The team is the clear underdog, and to win it is going to take a great three-day performance. This is what makes starting off well imperative. If the Euros start out on fire, it could take the wind out of the sails for the U.S. very quickly.

Seven of the guys from the 2012 team suffered a bad defeat, and that has to be in the back of their minds. Phil Mickelson had a horrible pro season and will need a big bounce back in this event. He’s going to be out with Keegan again, and those two are going to have to set the tone early for the U.S.

Zach Johnson and Matt Kuchar are vital for the US, as well as the aforementioned Phil/Keegan duo. The US also needs Kuchar and Johnson to put points on the board in the first four sessions. Keegan Bradley has a lot of game, but he is streaky and prone to letting his emotions take over his game. If he’s hot, that’s a good thing; if he’s not, the U.S. will begin to sew its own casket early.

Justin Rose could be a big difference maker for the Euros. He’s played well recently and won a could times this year, and he’ll be paired with Ian Poulter in the first couple days. That tandem could spell a lot of trouble for the U.S. Poulter is expected by many to have a big event, and with he and so many Euros playing good golf right now, it’s difficult to imagine the U.S. pulling a big upset here. It will likely go down as the eighth loss in 10 years for the Americans.