Posted on October 22, 2014 by Brett David Roberts in Baseball,Headlines 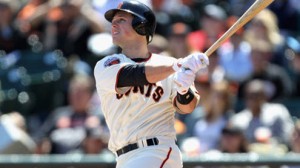 San Francisco won game 1 and will send Jake Peavy to the mound in hopes to secure a second victory in the World Series. The Kansas City Royals will counter with rookie Yordana Ventura, and the Royals are 1.5-point favorites in the game.

The loss was the first of the postseason for the Royals. Peavy expects a heady task before himself, commenting “(we’ll) have our work cut out for us, for sure.”

Royals manager Ned Yost was unsurprised by the 7-1 loss, saying “We didn’t expect to come in and sweep the San Francisco Giants. We knew that this was a series that was going to go deep. We know how tough they are…”

The Giants benefitted from the hot bats of Pablo Sandoval and Hunter Pence, both of whom had two hits and two RBIs. Pence hit a two-run homer in the first inning, and Sandoval has hit .400 since the start of the NLCS. He’s also reached base in 24 straight games, trailing only Boog Powell for the longest streak in club history.

Peavy is starting his sixth playoff game in the past two seasons, and he’s starting to fall off at 33 years of age. In Game 2 of the NLCS, Peavy gave up two runs and four hits with three walks in just four innings of a 5-4 loss to the Cardinals. Peavy is 1-5 with a 6.42 ERA in seven starts at Kansas City and his 4.97 ERA against the Royals is his worst among clubs he’s faced six times or more.

Ventura helped the Royals trounce Oakland but he allowed two runs and two hits in just 1/3rd of an inning. He said, “another thing I focus on is to live day by day.” That essentially says Ventura isn’t going to hang his head low due to what he’s done in the past. He was 5-7 with a 3.27 ERA in 16 home starts during the regular season, and the Royals haven’t lost back-to-back games since Sept. 20.

San Francisco’s relief pitchers have been great in October, with a 1.69 ERA in the postseason and 12.2 scoreless innings over the last four contests.