Posted on April 28, 2019 by Brett David Roberts in Headlines,NBA 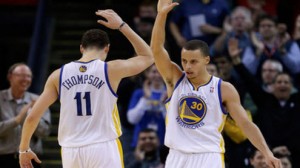 The Houston Rockets soundly dispatched the Utah Jazz 4-1 in Round one, while the Golden State Warriors clawed past a scrappy Los Angeles Clippers team to a 4-2 series win. Now the teams perhaps face their toughest respective tests in one another, as the Houston Rockets collide with the #1 seeded Warriors in a Best of Seven whose victor could easily be the 2019 title winner. Houston begins on the road at Oracle where the Warriors are 5.5-point favorites in a game with an over/under set at 224 points according to NBA oddsmakers at 5dimes. Game 1 tips off at 2:30 (CT) on ABC/ESPN.

Houston finished the 2019 season as 53-game winners and it won the Southwest Division title. The Rockets stormed ahead 3-0 against the Jazz before closing the series in Game 5. Houston ranked No. 11 in team offense with 113.9 points per game while holding opponents to 109.1 (No. 10), but the Rockets have potential MVP candidate James Harden and his 36 points per game average to test against any team in the league. Golden State, of course, sports four All-Stars in its starting lineup, and the team only seems to be better since losing DeMarcus Cousins for the remainder of the playoffs. His defense was more than suspect, but it was the actual cause for the Warriors mediocrity and struggles in dispatching a tough 8th seeded Clippers team.

For the postseason, Harden is averaging 27.8 points, 6.8 rebounds, eight assists and 2.2 steals per game while posting a PER of 22.16. Chris Paul has been solid, though unspectacular with 17 points and five assists per game. Clint Capela needs to be more involved with the offense, but part of the cause of his modest 10 points per game average was the fact Houston faced Utah and Rudy Gobert drew the assignment of Capela. He could be much more of a problem for the Warriors, who really lack legitimate talent at the 5-spot, although Kevon Looney and Draymond Green are both superb post defenders. The Rockets need Capela engaged on both ends because his shot blocking is another way he is able to vastly impact games. His 10 point, 10 rebounds, 1.8 blocks per game averages in Round one can all bear to improve against the Dubs if Houston is to win as underdogs in this series.

The key to this postseason for the Warriors may be the player least likely to return: Kevin Durant. While most are figuring he ends up a Knick one way or another, Durant has saved his best for this swan call. He is averaging 35 points per game, five rebounds, and five assists while coming up with 2.7 blocks/steals and a PER of 31.24. Stephen Curry has been solid enough at nearly 25 points per game, but Durant is leaving no doubt that he is the best and most dangerous Warrior.

Klay Thompson is averaging 17.3 points per game and knocking down 41.7 percent of his six attempted threes per game. Golden State shot 39.9 percent from three as a team against the Clippers, but Curry averaged 50 percent three-point shooting on his eight attempts per night. The Dubs obviously can continue to hit at this clip, so there is no mirage that this team can dismantle Houston with its three-point shot. The Rockets, however, defend the three better than every other team.

In 2018 it ranked No. 1 in holding opponents to 33.5 percent from behind the arc, and last season it was at 35.6 percent. Over the last three games, the Jazz shot just 23.7 percent from three, so if Houston can adequately defend Golden State’s most treacherous aspect, this series could end up being a tremendously close battle between perhaps the two best offensive units in the Association.