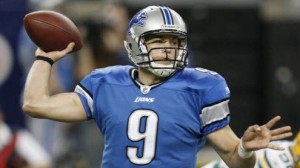 Last week was not particularly close as the Lions fell 21-42 in Green Bay. Matt Stafford threw 20 0f 33 for 244 yards and two touchdowns, but he threw an interception and was sacked four times for 26-yards-lost. Adrian Peterson had just seven carries for 41 yards, and Kerryon Johnson rushed eight times for 32 yards and a touchdown, but had no rushes longer than 8-yards. TJ Hockens caught four passes for 62 yards, while Marvin Hall and Marvin Jones Jr each added touchdown catches for the Lions. The Packers scored 25 second-half points after leading 14-3 at the half, and Detroit just could not keep up, after surrendering 229 passing yards but an even-more-costly 259 rushing yards on 35 attempts.

The Lions lost by just four points in Week 1, despite allowing three touchdown passes from Mitch Trubisky and the Bears. Stafford launched 42 passes but only completed 24 with a TD pass and a pick that week. Peterson is averaging 6.4 yards-per-carry this season on his 21 attempts, eight of hitch have been rushed for first downs. Stafford has been a mixed bag with his two picks and five sacks, though his three TD passes and 541 yards are good. Hockenson and Danny Amendola each have caught for over 100-yards through two games, but Detroit has to avoid the costly miscues to remain in contention for a Week 3 win as underdogs.

Lions are 17-37-2 ATS in their last 56 games after allowing more than 30 points in their previous game.

Lions are 2-8 ATS in their last 10 games following a ATS loss.

Lions are 1-4 ATS vs. a team with a winning record.

Over is 4-1 in Lions last 5 games following a ATS loss.

Over is 4-1 in Lions last 5 games following a straight up loss of more than 14 points.

Under is 10-4 in Lions last 14 games after allowing more than 30 points in their previous game.

The Arizona Cardinals are 2-0 after defeating Washington in Week 2 and San Francisco in Week 1. Last week against Washington, Kyler Murray threw 26 of 38 for 286 yards and a touchdown, though he did throw one pick and suffer three sacks. Murray rushed eight times for 67 yards though, including two TD hauls and a 21-yard long rush. Deandre Hopkins caught eight passes for 68 yards and the only receiving touchdown, while Larry Fitzgerald caught the second-most (7) for 50 yards. Four receivers finished with 50 yards or more in the game.

Murray thus far has been good, but not great. Among the positives are his 66.7 percent completion ratio, two touchdowns, and his team-leading 158 rushing yards, which includes a 7.5 yard-per-carry average. He has thrown two interceptions though and has been sacked 2.5 times per game. Not without blemish, he is off to a hot start. Kenyan Drake has bee good as the No. 1 backfield option with his 36 attempts for 146 yards and a touchdown. Hopkins has been outstanding as the lead receiver with 22 catches for 219 yards and a touchdown. His 13 first downs account for over half of the team’s total (25).

Cardinals are 4-1-1 ATS in their last 6 games following a straight up win.

Cardinals are 3-1-1 ATS in their last 5 games after accumulating more than 250 yards passing in their previous game.

Cardinals are 6-2 ATS in their last 8 games in September.

Cardinals are 6-15 ATS in their last 21 games as a home favorite.

Cardinals are 2-6 ATS in their last 8 games as a favorite.

Cardinals are 1-4 ATS in their last 5 games following a straight up win of more than 14 points.

Under is 4-1 in Cardinals last 5 games following a straight up win.

Under is 14-4 in Cardinals last 18 games as a home favorite.

Under is 6-2 in Cardinals last 8 games as a favorite.

Over is 6-2 in Cardinals last 8 games on grass.

Under is 23-9 in Cardinals last 32 games in September.

Under is 5-2 in Cardinals last 7 games overall.

Under is 15-6 in Cardinals last 21 games after accumulating more than 150 yards rushing in their previous game.